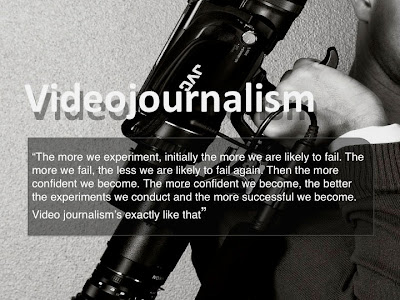 Cairo state television is taking the plunge into videojournalism and are looking at videojournalism not neccesarily as a cost-saving device per se, nor exclusively a more hands-on-deck approach, but a combination of this and the emerging aesthetic.

Eminent award wining journalist and Nieman scholar Prof Yuen Ying Chan, now director of Journalism studies at Hong Kong University asked a pressing question couple of days ago during our session on videojournalism the future. "Wasn't I talking about cinema verite?", she asked.

The differences are as wide between the two forms, I answered as they can be the same. Videojournalism is the feisty bastard child which seeks to be more than the sum of its parts.

That view is shaping up from prelim ethnographic studies that has me somewhat surprised.

One of the UK's most respected film makers and author of "the story of film", called it impressionism. Granted its use was in an artistic praxis at the time and there followed a debate about videojournalism's schizophrenia.

Videojournalism has its problems, but in the manner Cairo TV want to adopt it, it gives a respectful berth to Cinema Verite, adopting more "accelerated verite" under the ambit also of that precious statement of the 50s "4th person singular".

I hope to make a feature about what happens. See you on the other side. 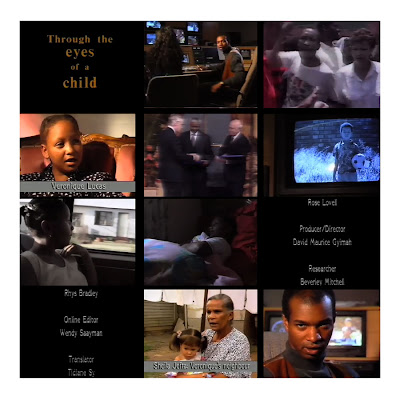 Through the eyes of a Child Director/producer David Dunkley Gyimah, 1993 The Line Producers, South Africa.

Two days ago at this conf in Bratislava, a chap approached me and said "Through the eyes of a child". I winced and then sheepishly said "yeeessss", naively thinking he'd seen the programme.

As it happens Tidiane, an award winning journalist in in Senegal, was the french translator/narrator on this features I made in 1993 whilst living in South Africa.

We'd never met before and here 17 years later were reminiscing about the prog and South Africa for the first time. Happy times !
Posted by Dr David Dunkley Gyimah at 8:55 pm