Sport now, and an ode to Msr Hamilton 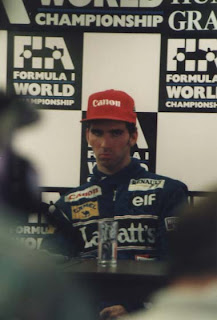 I remember the days, Damon's tango with shunter Schuey in Adelaide - that was exciting.
But what about when Nigel Mansel blew his tyres, manages to steer it to safety, then strolled out of his car as if he's just taken the dog for a walk - that was @£*&^*bril.
Then Mikka - that blubber moment on losing his car and a career to the race tracks - we missed you. That was interesting.
The great Ayrton Senna no more - Imola.
Schewy's first F1 ride - whoah.
And then the Tiger of the race track pounces. *&^%$ Damn Damn Damn, exhilirating... leaving all in your wake.
Seven years ago a good friend and confident of Hamilton's dad, Kevin Haggerthy asked me if I wanted to do a doc on this amazing talent being groomed by big Ron.
Of course I declined, who would have taken it. I didn't make the same mistake a few years later when Lennox Lewis asked if I would accompany him to his fight with Tyson. Of course no one still wanted the doc.
New talent requires a new broom. Hurry up internet. I want 100mb as standard, then I don't care if I have a commission or not.
Posted by Dr David Dunkley Gyimah at 7:38 pm