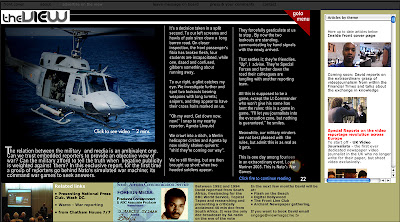 Very interesting post in which indie VJ Cliff Etzel - an email buddy - exchanges views with others at the water cooler.

The big one! Newspaper reporters are now video editors, what's your take? I have been fortunate to work with quite a few newspapers in the UK, more recently with the Financial Times amd while video is the new kid on the block, my contention is the written word remains strong, and possibly will get stronger.

Couple of things to consider for such a statement. The triple play eventually may well be the choice between the article, video or audio podcast.

When I developed viewmagazine, I had an idea that was so 'nuts' that to tell any newspaper company to adopt, well...I'd imagine the rhetoric: "Stand aside - what do you know?" And that's being nice.

Viewmagazine relies principally on the writer and strong photojournalism - the very tenants of basic journalism. But what would happen I asked if you clicked the picture? What if I could hide video behind it? In some cases what if the picture slowly animated? That's the now.

Then what if an incon next to the article, when triggered, delivered the article in the spoken word? What if also we could link audio and video seemlessly as yo do with text? That's the next phase.

The implications whether to do with accessibility or creatvity - the triple play should increase the dispersal / readership of articles.

In the last two weeks I have since learned that two national newspapers in the UK will break through in the aforementioned style. And yes as I imagined if you want to see just video you can by jumping to the paper's library or in viewmag's case Apple's podcast.

But something else kicks in which is the stuff of newspapers - 21st C. equitone. It's from the era of Addison and Steele C17th; literary figures who drove the evolving newspaper industry. Equitone became the emerging prose in which newspaper writing would adopt, developed further with journalese, headlines writting etc.

300 years odd and you could argue that while video is a threat of sorts, the written word itself online is fighting itself.

By that, what often works offline may not punch above its weight online, because of online's rules of engagement: meta tags, and linking phrases. We're now writing not only for an online audience but a cacophony of spiders trawling the web googling your prose, deconstructing your article and testing the limits of its web-friendliness, with the reward that the more webnastic it is the more people get to see it, cuz it rises up the google ranking.

I bought a video recently, something about great cinematographers. It proved something I'd thought but not been able to get to the bottom of. That all the things we're doing now with video is history on a loop. Before Man with a Movie Camera, Birth of a Nation, the early pioneers of film did it all themselves. They presumably had nothing to be concerned about as they was no strict division of labour that has come to structure our industry today.

The industry is going through its own perestroika and glasnost and the big question is whether newspapers adapt. Do newspaper reporters become video editors...........?

In this link newspaper journos in their own words talk about video journalism and what it means to them.