New Designs for the web 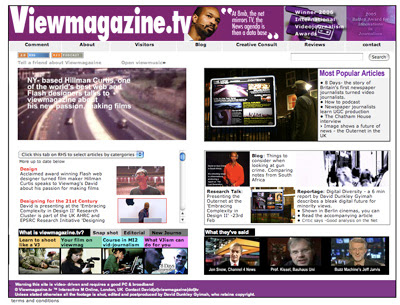 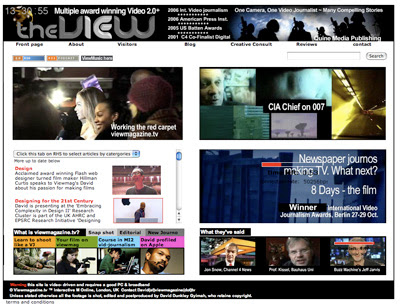 Six weeks into the Masters programme for Online Journalism and the students have impressed. But something else happened that only perhaps other lecturers/teachers will recognise, they gave something back. Perhaps it was not so overt. We opened up the web further to look at redesigns and spoke about Gillmore.

How can we influence that which has not been made. Part of Gilmore's book about We Media is about projection. Yes it looks back at a scholarly timeline of the media, but it only serves to ask: what now?

In examining, The Mirror, Telegraph, The Sun, The Times et all, a couple of things are emerging.

Sites are becoming more televisual- that was bound to happen see blog/article here from two year back.

But also some pros are sensing a greater cleaness about design. Under the bonnet that's CSS, but the aesthetic is more scandanavian, than Brit or even US/Chinese - which tends to favour portal dense sites.

Opening a site means using spatial colours. In selling a house, marrigold, according to a recent survey in Britain from Estate agents is preferable. It creates the illusion of space.

Space, weight and symmetry are the parameters, and more, that hold the grid for design together.

So late last night I looked to change some of these parameters on my own site.

The colour has been one I have long admired and once purchased a suit from the excruciatingly expensive but de rigour designer, Ozwald Boateng. There's something about pastel, what I call offset colours. The Times has executed that brilliantly with the lime green colour scheme it now employs for its new site.

So what do you think? The classic black - which will always have a place - and the hexidecimal 6600cc colour.

Also without making the site any more dense with images, it's now occurred to me there can be a far greater use of the front page with a popularity index and further links highlighting blogs.

Having said all that I will want to on occasion revisit the predominant panoramic quadrants, but am also aware that the new structure sets up a natural hiearchy.

So a start, but I have my students to thank. :)
Posted by Dr David Dunkley Gyimah at 1:45 pm

I like the color very much. I don´t why and I don´t know how, but it makes the viewer want to sink into the website even more than before!
The magic of design I suppose...

ps: the students thank you too!!