Training in foreign news reporting in the digital noisy age. 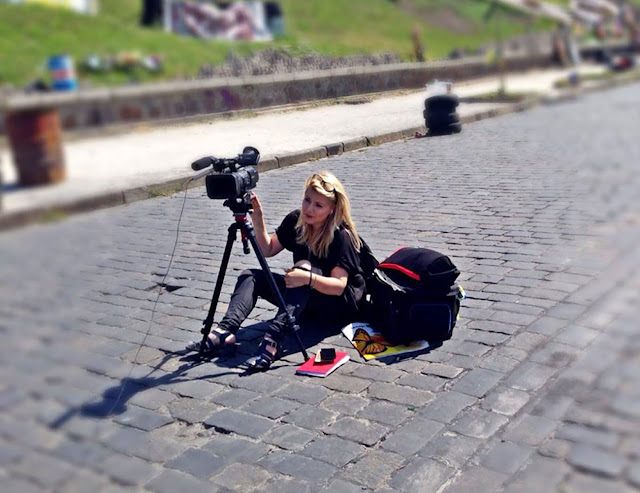 ana couldn’t believe her misfortune whilst setting up in one of the world’s hot zones, Ukraine’s Maidan Square. It’s quiet now. Five months earlier it was under siege; a battle zone between government security forces and protestors against president Ukrainian President, Viktor Yanukovych,
She’d checked and doubled checked everything before she left London; equipment, risk assessment, pre-shoot research script, but now one of her contacts had bailed on her.
When you’re on your own and a chunk of your programme idea falls away your options are either to can the idea or improvise to save it whilst evaluating the risks. Great improvisation comes from a canny instinct and understanding craft skills. You can’t make up what you don’t know proficiently. Today tech calls that agile production.
Back in London, Oana’s grafting would earn her report high praise. Rare footage taken by a videojournalist she acquired provided unseen knowledge behind the bloody protest. She graduated from her Masters and duly found work at the BBC and made a number of special reports from Poland. Her desire was always to work for the international arm of a network and become a foreign reporter. Somewhere in the world, I know she’s doing just that.

By definition reporting from a foreign land makes you a foreign news reporter particularly in the digital age where everyone is a potential broadcaster and no one needs to vet your skills. In his promo, multi-award winning mojo Yusuf Omar explains:

Thus Omar did what legions before him would do, he went it alone reporting for his citizen journalism outfit. The big or brand named publishers may have alluded him, but he probably gives that short shrift now as he travels the world delivering workshops on journalism with a mobile phone, as well as acquiring celebrity status.
In practise, and by convention (if you listen to convention) becoming a foreign reporter, or to use its much less loaded word, “international reporter” for a named publisher calls on an expert understanding and analysis of a country’s socio-politics, or at least how to source it.
Being around the block enough for industry figures to have a measure of your ethics and professional standards which will be tested. Meanwhile you sport unkempt grey hairs suggesting you have skin in the game and sharp elbows — a firm desirable. Being an international reporter is not for the meek. You may taking the OCEANs test find you’re not cut out for its rough and tumble.
Viewed as the plumb of plumb jobs, with all its romanticised travel, daring-dos and hotel hopping, it’s small wonder scores of reporters want a crack at it. In reality writes Tony Grant editor of BBC Radio 4’s flag ship programme, From our own correspondent, it’s far from it.

The job involves a great deal of hanging around, often late at night or early on the morning, waiting for people to arrive at airports or to emerge from hospitals or courts clutching statement.

After stints at BBC Newsnight, and reporting on BBC 2’s Reportage in the early 1990s, I too felt the itch. Naturally, after several rejections I became aware no one was going to hire a Chemistry and Maths grad with a penchant for African politics. Hence, I made my own way to one of the world’s trouble news spots, South Africa, and slowly but methodically listened and learned. 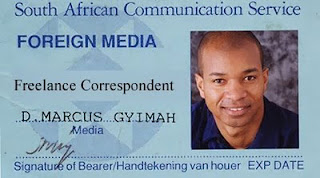 Eventually I would be reporting for the BBC World Service, its African and Caribbean Service and BBC Radio 4 documentaries. By the time I’d left South Africa filing my last report covering President Mandela’s inauguration the Head of Studies at Chatham House, Professor Jack Spence would invite me to become one of its youngest full members. Twenty-five years later, I’m still a member.


Skills and Knowledge
What I learned becoming an international reporter has been put into practice countless times helping a new generation and whilst age is not a defining quality, craft skills and embedded knowledge of a subject do matter.
Tamer, written about here in 2007, had come from Gaza to gain an MA in journalism. With the course barely over, he told me he was going for a job as Gaza correspondent for the soon-to-be launched BBC Arabic service.
There were two major skillsets he’d learned. Here’s what you do I advised. At the age of 24-years Tamer returned the next day to break the news. “Mr David I’m now the BBC’s correspondent from Gaza”. He beat a field of experienced practitioners. He did it.
Today those technical skillsets have changed in a new digital era, but the underlying principles and artistic skills remains in tact. This is the storyverse, which you’ll want to master. It correlates with the workflow of storytelling, digital tools and pre-visualising how to proceed in the digital noise age where disinformation is rife. 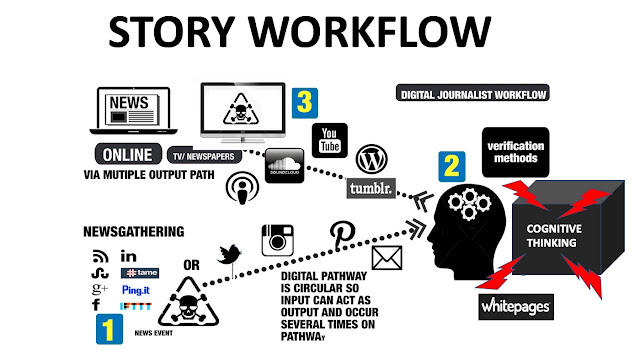 What you see and how you interpret events is framed by your cognitive thinking — the black box; your approach and dissemination of knowledge. Skills can be easily acquired. A few classes mastering camera work, or shooting on mobile is enough to get you up and running, the knowledge of how framing and camera movement affects the audience takes longer.
There are competing interests, but one of the first things is to develop an idea of your audience’s persona. A butcher sells meat, a lawyer legal services, as a journalist you sell stories. Buzzfeed and Vice magazine’s case studies are informative and worth studying. There are several ways to build a likely audience’s profile, perhaps from surveys. In the digital noise era which I’ll explain in a future post, I’ll show how you can get even more granular.
Next in competing interests are ideas. Creative ideas and problem solving, two highly ranked characteristics in the World Economic Forum’s 2020 data, have a direct impact on your audience’s needs.
When I landed in South Africa for the first time and each time I travel on a story I ask to be taken to a popular coffee shop or pub, where you can hold a decent conversation. I usually take a curio which can easily start off a conversation. In South Africa, as a genuine Rugby fan, I’d wear an England shirt. The sight of a black man, wearing England colours would often spark incredulity before the archetypal question. “Are there black people in England?” or “Why are you here?”
The next thing was to analyse nupes and trend extrapolate their output; a pattern soon emerges about what the region’s main newspaper or digital publishers produce for their audiences. This can be significant but also requires caution. If Buzzfeed or Vice followed the popular signage they would not have been successful as they are. There’s a swathe of untapped readers that publishers are vying for.
The third for this post is style and form for your audience. Over the last two decades several branches of journalism have emerged, each of them a reaction to a deficiency in the market. I’d like to think, amongst them there are very few that are platform agnostic and deal with story structure. 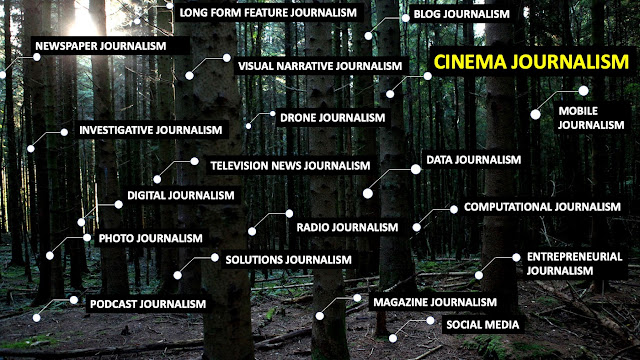 For dye-in-the-wool videojournalists that would be cinema journalism — a craft that subsumes all other forms in its quest to tell stories. A crude analogy to imagine is its fictional form. Films like The Big Short, Scott Pilgrim vs. the World, and The Kingdom (below) are three different movies that incorporate styles in seen in data, Tik-Tok and motion graphics. The Kingdom’s opening sequence is still one of the best journalistic stories told, which can be achieved using after affects. You can find more about videojournalism and cinema journalism in my medium posts and this short film here .