Videojournalism: the revolution in media influencing academia. On assignment near Syria's border.

In this video, something happens at 1.27, but you need the contexts of the earlier footage, so be patient,

The girl singing survived, you see her ushered into a safe place as her caretaker calls her name.

The caretaker is a videojournalist, an activist documenting the atrocities in his country. Two years ago circumstances led him to pick up a camera. For the next 7 days, I share a space with him and fifteen other so called "activists", in one of the most rewarding and emotional projects I have been involve with for a while.

"Non-emergency personnel and family members" were ordered to leave Beirut and given permission to leave Adana, near Turkey's border with Syria.

This news reported on Reuters couldn't be any worse. No S**t a friend said. In 8 hours time I was heading into the very region, Adana, where Americans officials were being ordered out of.

Apprehensive, Yes! Enough to talk about a likely exit plan, if things were to go Pete Tong [wrong] , as we the Brits say.

Last time I had butterflies like this was traveling to Tunisia, Beirut, Cairo and in the 90s South Africa. What's new? Except there was no whiff of air strikes or rogue chemicals in the air.

There are lecturers I know and respect who make it a habit to stay in touch with their craft e.g. Bill Gentiles a figurehead in the world of backpack journalism.

Not by design, more by default, but firstly, the need to stay in touch with the field I'm in is an anti-bored pill. Secondly, it furnishes me with my narrative for storytelling I like to tell. These story-forms derive from a fascination in what experts call the world without theory: Bakhtin's Carnival.

I train enthusiasts to become videojournalists, but to paraphrase Mr Cobbs " I specialise in a very specific type of security  videojournalism". I apologise if that sounds arrogant. It's not meant to be.

This videojournalism has been the subject of a six year PhD, [historical and qualitative] which through the selfless help of  Rosensblum, Drew, Turness - NBC first woman president of News -  and several other people.e.g.  contemporary videojournalists such as Adam Westbrook. The thesis should  be evaluated soon.

The working-in-the-field also, many performance lecturers believe has benefits for their students.
What I do constitutes experiential knowledge. Lectures become hermeneutical. Practice is informed by theory, and the process of curating information becomes wrapped in that most basic of perceptions.

You know the story of the politician expressing a point evoking Mary with one child agreeing that raising taxes puts her 100 UKP in the red each month. Well yes, merely saying that gives you scope to imagine Mary and hear her predicament, even when she's not real.

In performance lecturing, based on actual events, the narrative of teaching journalism, say expressing SEO, ethics or how to keep a low profile, is a story in itself.

A brief visual history of videojournalism from david dunkley gyimah on Vimeo.

Did I tell you the time, I had to Q and A with Nelson Mandela at a press conference and I was terrified out of my wits, and then met him at a foreign correspondence do? South Africa 94.  Or being asked to film for Heavy weight Boxer Lennox Lewis and his camp as he fought Tyson?  Memphis, 2002. Or  back in February explaining cinema journalism to the Arab media summit? Cairo, 2013.

Experiential notes on a page - that mobile narrative. 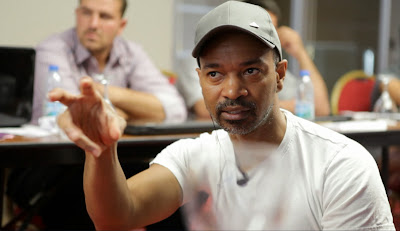 The story of what happened in the week in Adana is extraordinary.  A series of lectures, exchange of knowledge, seven stories that we  (Marwan, Fires, myself ] had to shape - some of which constitute war crimes of a nature that would make you physically sick.


The video at the top.. dramatic, terrifying.. their stories deserve a proscenium, where we can learn more about them in ways that are affective Presence reality?

Imagine going to see a film at the cinema, and then seconds after the film finishes the general manager tells the audience to hang on, because we now have a personal skype interview with the participants in the story.

Otherwise imagine I create a story that leads imperceptibly into their stories, and everything from the technology to the social issues become dialogical.

Or what about a lecture in which the wisdom of crowds is also the narrative. This is the domain of Touch cast which I explained in my previous post.

These are methods to bring journallism straight into the lecture room in a more visceral way, but also to pump it out again as both narrative and eipitome [ notes in a lecture]. See my post yesterday on the BBC's secret weapon and popular post, the theory of new videojournalism

It requires a new collaboration - a pragmatism to lecturing emerging from the interplay of the professional practice and theoretician. The two have always been bedfellows, yet academia post 70s has invariably delineated the two. In his wonderful articles Bordwell expressed this in a related way why don't academics and critics get along.

This merge will also spawn a new type of university, one which corresponds to the demands on the one had of emerging technologies, but also as part of its core values thinks up the next generation of practices, not as a theoretical exercise, but by creation.

This new proscenium will see a heurestics of emerging media as key, utilising apps that bring journalism in the field right into lectures. I'm excited by this.

Thanks to Marwan and the team from Menapolis

Viewmagazine.tv is about to undergo an overhaul to reflect what academics refer to as an autoethnographic study, where I use myself as the narrative to express the changes to journalism and communications, such as shift media and videohyperlinking - my most recent post.