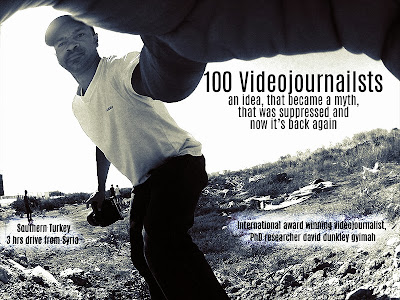 David Dunkley Gyimah, winner of the prestigious (US) Knight Batten global award for Innovation in Journalism (www.viewmagazine.tv),  and the International Videojournalism Award, has completed a six year study into Videojournalism.

The study constitutes his PhD thesis he submits in January 2013 and is one of the most thorough examinations of the form pointing to its future.

David, a technologist and one of the UK's first official videojournalists uncovers a number of widely held current beliefs that are are shown to be flawed. He unearths the rationale behind the misapprehension of the form now adopted by newspaper and broadcasters and maps out its future based on rigorous research.

A news and current affairs journalist for more than twenty five years working for leading outlets such as BBC Newsnight, Channel 4 News and ABC News, David co-launched the UK's Press Association programme and has trained journalists from the FT, Chicago SunTimes and Annahar newspaper in Lebanon about videojournalism.

According to David, traces of the original form and style are only now only re-emerging as the movement he calls the "100 videojournalists"and it's not significantly because of the Internet. The name  '100 videojournalists' derives from the first 100 to become disciplined in the forms original philosophy.


The thesis is an historical and analytical study and involves  methods collating data and research about videojournalism. These include  ethnographic work across several countries and  Mass Communication.

The latter is a critical evaluation of videojournalism, based on David's background. He was one of  the UK's first official videojournalists in1994 and has been on the web since 1996 forecasting the likes of embedded video, video-hyperlinking and the Outernet. He's contributed to many conferences, such as Restoring the Trust in San Antonio and the ONA, where he spoke about the theory behind videojournalism.

Says David, this PhD has been a torturous labour of love and it's not finished yet. It still needs to be vivaed, but if the rhetoric works then it undoes the conventions of what generally is known about videojournalism and offers a new discourse for anyone entering the field.

He adds: I interviewed five different groups amounting to 100 leading media experts and Videojournalists around the world, such as Deborah Turness, now  NBC's new president of news; Robert Drew founder of Cinema Verite in the 1960s and talent such as Scott Rensberger, whom with similar talent confirm my assumptions.

If you were to be learn about its findings, how could you make a difference? So the thesis addresses pedagogy, but also practical schemas. 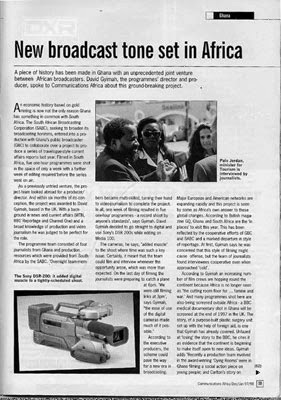 The research has taken David six years and to countries like China, Southern Turkey near the Syrian border, and South Africa.  David started his career as a videojournalist at Channel One Television in London before taking the form to a number of outlets. In 1997 African state broadcasters Ghana Television and South Africa's state broadcaster used videojournalism to produce a series of programmes about each other.

David is currently a  senior lecturer at the University of Westminster,  a judge for the UK's RTS Awards (UK EMMYS), artist-in-residence at the London Southbank Centre and advisor for a number of academic and commercial-led companies.