How Apple closed down Apple.com and my greatest party trick

Ajaz Ahmed is the embodiment of cool, mid 40s, founder of one of the world's most successful Ad companies, and a multimillionaire. Last year 80 percent his company AKQA was sold to WPP Martin's Sorrell.

From the 90s when he first conceived of his ideas and found a loyal audience in Nike, Ahmed's company, and approach appeared to mirror the ethos of the one and only Apple.

Cool, innovative, and daring to turn the Ad industry on its head,  Apple's endorsement came in the way of a high profile piece on its Apple.com site.

Being cool just got cooler.

Not now though, Ahmed still generates column inches, indeed writing his own book, "Velocity" on an emergent philosophy of advertising which is a good read. But his Apple profile has vamoozed. Not that this should worry him.

To be exact, Ahmed and several other pros, to which Apple provided some of its star dust have been stripped from Apple. Only to be found in the Internet barren land of wayback.com

An Apple friend tells me the site, Apple.com,  has been decommissioned and with it my own 'not-so-worthy' endorsement.

How Apple made me cool, really!
Let me explain, back in 2006, via an acquaintance of an acquaintance at a UK tech conference, I approached an Apple executive to tell him how the Mac is embedded in my genes.

And given I'm one of the first people in the UK to be genetically fingerprinted. Really! And no I'm not a crim, that perhaps was a big claim.  Incidently years later when I graduated in Applied Chemistry I made my first radio docmuentary aired on the BBC about the Dr Jeffrey's the man behind the gene science.

So the Mac then let me do so many things e.g. videojournalism, I couldn't do when I was either with the BBC, or Channel 4 News. For instance this promo here which includes an interview with former head of the CIA and travelling on her majesty's the Queen's private jet. 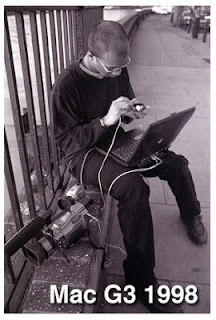 In fact I bought my first power book by taking a flight to New York, walking into a store, paying $3000 and getting back on a flight again. Oh I did have a walk about and lunch before flying back. But the cost of the ticket and Mac was still much cheaper than UK prices.

My Mac had become my Johnny Mnemonic helping me bag a couple of awards. Apple, supposedly liked what they saw and dispatched a reporter to interview me.

It didn't go well.  From loquacious, I became lugubrious and so  I was thoroughly amazed to read  the article that emerged.

In fact the article became a party piece at conferences. Not the vain quest to big up myself. I'm just a guy with a mac who gets tired of rules, or what Foucault calls discursive formations.

No, the party trick was if I was ever asked for my email, or a delegate found it difficult to spell my name I would say, google "David Apple". Two common words that generated nearly a billion searches and more often than not, I'd come first in the rankings.

Unhinged in cyberspace
The Chinese, particularly in China loved it. Somehow I owned the web, or knew jobs himself.  A month ago someone pinged me from own website, viewmagazine.tv. "you've a broken link to your Apple page".  An old Chinese friend; the chinese as I have come to learn get provenance in a big way.

And truly enough I was no more. My friend within Apple says, Apple are now a different company. In the mid 90s they were pushing on the Macs. That technology is now so outdated, as is Apple's strategy which has grown into a polysemic one of  hardware e.g. iPhones,  Apps, and Softwares.


I'll  miss the Apple Pro site featuring Ahmed and others, and not least performing my own party trick. From twice presenting at Apple a site, my first talk languishes on page 3, or 4 or... depending on the SEO of the day, under:

So that's how Apple decomissioned Apple.com and my greatest party trick. In fairness, Apple is still profiling those who use its products in innovative ways. Here's Apple Pro the next generation, using Aperture, FCP et al.

All of which has given me an idea. Apple's still a big part of what I do. but there's no point in flying to the US to buy the latest, however, if Apple is listening, I'm just about completing my PhD into the future of storytelling, a labour that has taken six years, several countries and countless interviews  -and truthfully I couldn't have done it without my Mac.

Because I have filmed the making of my PhD and the films I'm submitting on my Macbook.  Hi Apple, did you hear that :)


David Dunkley Gyimah, is a senior lecturer at the University of Westminster, an artist-in-residence at the Southbank Centre and a videojournalist/ film maker.  He's formerly worked in many areas of traditional broadcasting at the BBC, Channel 4 and ABC News as either a reporter, producer or series maker. His currently completing his PhD which examines a wide range of story forms and what makes them innovative and engaging with audiences. Apple, once gave him a free powerbook.

Posted by Dr David Dunkley Gyimah at 10:50 am