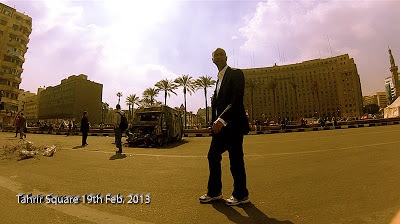 Our host, himself an Egyptian and a seasoned journalism, was matter of fact in his tone, as we filed out of a conference into the cool breeze.

That coolness morphed into a chill. Tahrir is not the square I knew before the revolution in 2007, when I first came here.

Neither was it the strangely homely place residents had built to oust a president.  The current occupants  we were told are cynical, factional, partisan and more hard edged.

True to this picture, minutes later we are accosted by three young men.

We ignore them and pick up our heels.

In Egypt there's a bipolar attitude to this story. Some are tired of its dominant symbolism slowly atrophying the country's international tourism. The other, says, a delegate is that it's badly reported and the stalemate here looks like continuing for a long while yet.

There's no police in sight and its being run as an autonomous enclave.

I'm here at the invitation of the Arab league, speaking at a two day conference, and using the opportunity to to wrap up my findings into videojournalism.

Now everyone has a camera; citizen journalism is as ubiquitous as the acrid air from Cairo's congested cars and their fumes.  And the effect of the democratisation of shooting isn't helping, we're told.

Fifteen years ago, Itemulang, a bright 20-something in South Africa, spoke to me of the political change in South Africa for a videojournalism film for Channel 4 News, but, he added, we haven't had a social one.

In Cairo, the do-it-yourself approach appears to have detonated a wealth of social networking, without the social responsibility.

How do we ensure we get the truth, a senior figure connected to the United Nations asked. My reply, rather long-winded, was you can't.  A former student of mine, Rabia, urged public programmes of sorts to educate the public.

Don't be fooled, it's not new either. We can look to Robert Drew, the father of cinema verite, whom I had the pleasure of speaking to a little while back. And before then, don't underestimate the Russians.

Cinema journalism though separates the unique videos from the  garden variety videojournalism. But it comes with huge risks. That's what I aim to talk about.

And whilst the surge may be to create cinema, which by the way is not predicated on the camera look.

So a 5D gives you creed, but doesn't guarantee you the story.

No! Cinema journalism is a particular brand of story telling which requires craft skill. That's the message for tomorrow, as I deconstruct the form in my session.

See you tomorrow for an update.