Why the BBC will prevail with a new radicalised structure 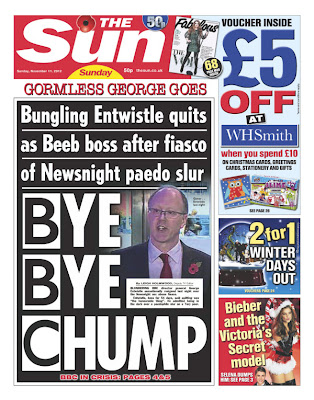 British newspapers didn't hold back. The Sun Newspaper (Murdoch), no friend of the BBC, must have thought Christmas had come early.

It was by the measure of experts on influential Sunday political show,  The Andrew Marr show over the top.

We will be reading, and you may have read several accounts of the BBC's self immolation, brought on entirely by itself according to one of the UK's most respected media analysts, Steve Hewlett, a former BBC senior programme maker.

You've most likely read about the cause of this. In short,  one film about an extremely popular entertainer, Jimmy Salville, whom it turns out was a paedophile, was withheld from being broadcast on the BBC's flagship news analysis programme, Newsnight.

Then a new film made by the Newsnight team which alleged there to be a child abuser, someone powerful in public life, turned out to be emphatically untrue.

The programme had committed an egregious error. If you're a Masters student studying libel, this is the case study No.1.

Newsnight is the programme I cut my BBC TV teeth on back in the 1990s. Back then I recall an incident when mixed up pictures led to a mistaken news item that  cleaners at Heathrow were asylum seekers. It was a simple case of editing the wrong pictures to the words.  Newsnight duly apologised.

Then on the rare ocassion, Robert Maxwell was libelled. The presenter that day breathed a sigh of relief; thank goodness you can't libel the dead.

No this post is not about Newsnight's errors. I have fond memories of my time there. But a couple of issues arise from this BBC affair.

In an era of evolving media and destruction of traditional structures, the inevitable murmurs are whether the BBC will go the way of Hoover PLC, MG Rover Group, ITV digital? It's possible but not probable.

However the collorary of this debacle is that perennial question. Is the BBC at 30,000 employees just too big?  A global brand, which has restated its influence in the digital, online world, but the costs?

Perhaps 50 years on this will be a moot point; the journalism, no I'll use the term non-fiction storytelling to emerge from my study favours an approach that is at odds with traditional journalism's values.  That said, the BBC's brand of journalism may become more valued.

No that's not even my point I wanted to moot. The real essence of this post was to empathise with next generation journos looking to join the BBC. If what emerges from this intense period of self evaluation results in the direction towards a smaller, more nimble, BBC, then sad as that might be in-house journos, it's the next crop who will be under pressure to find employment.

George Entwistle's extended garden leave won't last long. It's widely known he is a decent chap with a wealth of broadcast knowledge that headhunter will snap him rather sharpish.

What happens to the a stream of people about to lose their jobs is another matter entirely.