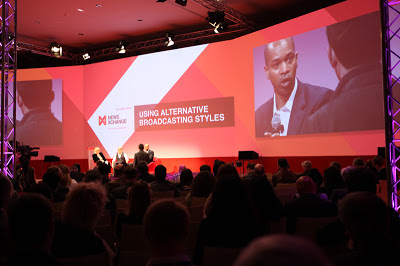 In the last couple of days, I have been at NewsXchange, Barcelona, one of the largest gatherings of news experts.

According to NewsXchange Managing Director Amy Selwyn there are more than 400 personnel here from 60 different countries.

You can find an agenda and what's on later today here.

Here however is a run down of what's transpired


David dunkley gyimah ‏@viewmagazine
First of the NewsXchange sessions over and the theme is minning data on par with F1 racing to give competitive edge to newsrooms. This was an impressive look at qualitative and quantitative breakdown of news' audience share in real time.

15th Nov
Sonia Nazario epic journalism http://enriquesjourney.com/  which changed society. spoke to Sonia afterwards. Few can do what she did by riding the train of death, Mexico. This is literary journalism similar to Sonia in textual and immersive prose is my fav. Luis Alberto Urrea - the Devil's Highway. Perils crossing into USA..


I said to Sonia she's doing cinema. She agreed. Worth reading Malcolm Lowry "Under the Volcano" (1947) for literature as cinema

Then @KhazarFatemi showed the trailer of her film capturing universal language of personal cinema, "Where my heart beats"http://www.youtube.com/watch?v=JWY5D2iz52k …  What emerged over dinner was the lengths and sacrifice she'd gone in Afghanistan to make her film which has since been shown at the UN. And the trailer was edited in LA by a Hollywood film editor.

In our session which I'll expand on in much detail later, three different networks showed how they're turning journalism inside out an alll for the better.

Posted by Dr David Dunkley Gyimah at 12:40 am