Letter from Tunisia - the future of videojournalism

Being a videojournalist in the midst of Ramadan isn't some thing that weighs on the minds of many videojournalists, but the reality begs a rethink here in Tunisia, which adheres quite strictly to its fasting.

For one, you've not eaten since the morning, water won't pass your lips and the sun is scorching as you set out on your second assignment. You don't need to be a doctor to know your blood sugar levels are low.

That however is not a perennial issue. What is is how videojournalism is practised and the implications for a region that can look to the past for a blue print.

For the meantime, we work to undo a series of conventional rules that are now stifling videojournalism film making (an oxymoron). For instance the use of the rule of thirds, no one can quite say why its used other than it's a rule. IT'S NOT!!!!!

When your lecturer tells you it is ask them to quote the source.

It is no more a rule than me saying when filming the subject should not look into the camera. The picture above breaks the rule of third. One of the great film makers ever Ozu rarely, if ever, obeyed some rule that said, place these figures into a third of the screen. It's about the balance of the picture, not the rule.

New Journalism
For the umpteenth time, I have showed the same video to a group of Tunisian videojournalists, Chinese students, PhD researcher and International Students and the results are the same.


The paradox with videojournalism is the issue that most impales its ability to defend itself, because everyone can do videojournalism it's so easy, there's little need to attempt to understand what we're doing.

Point and shoot, just capture the data. Television got away with it for a long time because it developed a semiotic that appeared to fall in line with its aim to be impartial and all the rest. Thus the next time you record an interview, you'll likely to frame a medium-wide shot, placed a third of the screen.

And when asked why you're probably quote a book or that someone said something, and he or she when asked will quote someone else until we reach an impasse and we realise some executive determined that was the correct thing to do.

Just as, and if you read  Mike Conway's book on the origins of American television news and Green's television news, you discover news execs were so terrified of losing audiences they devised news should be short- less than 2 minutes, it's stuck with professional broadcast news since

The medium wide shot for interviews was the correct way then because the medium-wide swiftly established its connotative style as being neutral, but just because it was then, doesn't make it correct now, but no one's asking.

As a videojournalist and a researcher, something more tangible and researched should underpin our ideas in this digital era. Otherwise it's the equivalence of having someone try art drawings for the first time because the tools are available and saying well done for drawing.

Post script - Three days later working we held this event on a creative approach to videojournalism. For the full story and more on cinema journalism - viewmagazine.tv 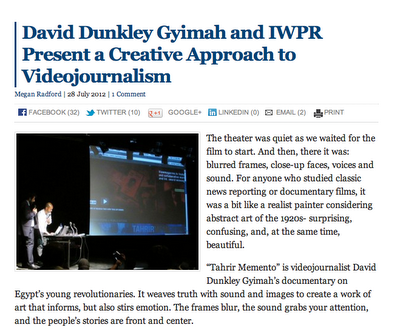