The hypothesis goes in regions where there's been strife,  conflict and transitions, artists creatives and film makers typically create new schemas to express themselves and tell stories.

Italian Neorealism is a classic example and perhaps one of the most enduring that used the post war period to create a style of film which used the streets as its studios and non-actors and plots to capture moments of moral issues.

Enduring too because it was one of the few film styles that provided an intelligent popularised alternative to America's hegemony on film making.  Neorealism laid the ground work for Noir and films such as Double Indemnity (1944) - one of my favourites.

In Neorealism, the closing scene to Umberto D (1952) by Vittorio De Sica features the desperate lead character feeling so suicidal from a spate of bad fortune, that he figures once he finds his dog a home, he will end his life. He very nearly does with his dog who later shuns him, before a touching reconcilation.

It's a simple story but deeply allegorical and there are many others.

More recently from Egypt, their crowd sourcing film making 18 Days in Egypt provided one of the most notable schemas to film crowd sourcing and has made its producers house hold names on the innovative doc circuit. 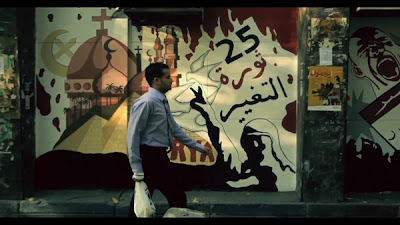 My own feature Tahrir Square illustrated how graffiti and fine painters, as well as theatre actors, poets and singer songwriters were inspired to be expressive.

As an academic, as well as film maker/ videojournalist the opportunity to visit Tunisia to gain an insight into the creative fraternity, which is by no means not a homogeneous mass, was something that intrigued me.

A couple of weeks earlier at a closed meeting held under the Chatham House Rule at Chatham House which is the UK's leading think tank, I asked a question of a high powered delegation talking about regeneration in the region.

They'd not mentioned media, I said, but would they agree that film makers etc have a huge role.

The delegation agreed, but the problem they said was invariably a newer media or even film makers become so determined to show their credentials, they end up practising a kind of 'gotcha journalism' against the old order.

I understood the subtlety of the answer.

Cinema journalism can be explained ontologically in its metaphysical way; and epistemologically, as a way of creating and understanding its knowledge.

The reason why I posit these two ways of looking at cinema journalism is I talk about it being about richer story forms, marching beyond classic documentary mode and news in terms of impartiality and finding plot and visual grammar to create meaning.

Yet ontologically just because it eschews impartiality or looks to be expressive doesn't mean its practitioners are rabid propagandists or can't be honest.

As one of the founding fathers of cinema verite, Robert Drew told me it's a very difficult art to master because it calls into question your own ideology and what you stand for.

Transparency thus in cinema journalism is crucial, because at the point you overtly direct the viewer's attention, you nakedly unlike news' fig-leaf disguise are making a statement about you. That's why its metaphysical.

Tomorrow, the IWPR the principle broker and other stakeholders will be  meeting some of the creatives from contacts that came to the cinema journalism event.