THE CORPORATION REPORT - intentions in seeing and making 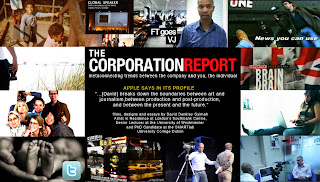 Now showing on Viewmagazine.tv we, you we're all corporations now.

Whether you're the BBC, IBM, Mediastorm, or Liang Zhao from the Chinese Communications University (who's just joined Twitter) we continually tell stories.

And this narrative whether visual, audio or text increases, by default, the awareness of ourselves, our self-identity, our work.

Globalisation a key to a corporation's brand expansion and symbolic experience, tangible or otherwise, we can now achieve through twitter, social neural works, websites and blogs.

I once told CNN's Christiana Amanpour at the Front Line Club what I felt about her brand quotient, and she expressed surprise. But you don't need to be Amanpour or IBM today.

To qualify what I mean by brand, in my lectures I distinguish between the brand as the classic corporation e.g. BBC,  the celebrity brand e.g. David Beckham and the new meta (beyond)  brand.

On BBC's The Apprentice, the young turk calling himself the brand had a point, though hubris and the idea he saw himself as a classic brand confused his message.

This id promotion may commence low level, but its trajectory is steep and uses much of the pedagogy of classic branding, but there are new areas to discover. There is much fantastic work for brand evangelists to deliver when considering this simple yet powerful statement.

But branding is but one of the feelers in the quest for meta connections.

This deduction links into a more rigorous, fun, performative presentation I have been delivering to Corporations, big "C" such as BBC World Service executives and small "c"  individuals (young people, organisations), which I have underpinned with this aphorism.

The statement seems simple enough, but it embodies cognition, the subconcious, and how we think (conscious)  in various disciplines. It's not a grand theory, and I do my best to hide away any overt philosophical discourse to keep it entertaining.

But is asks the question, how do you know what you know within  a context of design, visual e.g. videojournalism and film making, textual narrative, cinematic space and a host of pop philosophy theories?

For instance, when you see this next picture, most likely you'll smile. Why? Because you're hardwired, but when I show you the next one, your reaction may differ depending on your culture (convention). and your own individualism. This is nothing new. 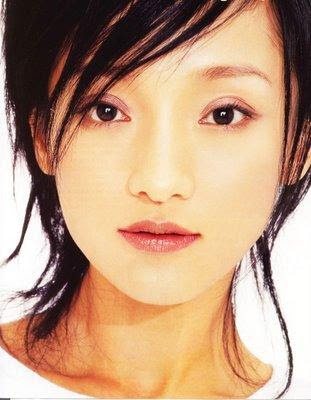 What is is the increasing array of hybrid theories to interpret events.

Incidentally this is Xun Zhou -  a talented award winning actress, singer whom I liked in the moral fantasy tale Painted Skin.

However the requirement of most creators is to ensure convention becomes hardwired, a desire becomes a need, a story hits certain points in ones psyche - the sub conscious. You may not have encountered those events before, but you're affected.

Increasingly I have become less interested in process, referring instead to an illogical rationalism, whereby convention is recognised but reworked. 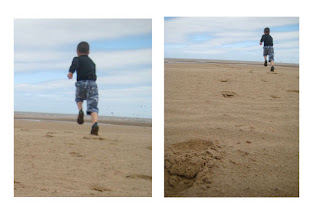 Take these two images above from the same lecture. Which one appeals to you?  Possibly, the second. Many text books will deconstruct this within the rule of thirds. It's a convention which appears to arise from empirical studies from paintings.

However, it's become a construct which is consistently broken in films or distorted to achieve the effect of making you uncomfortable, as in Rob's film.


Also, and equally interesting is the these conventions emerged from the dominance of western paintings and revelations of perspective. Some work in China showed me how early Chinese art disregarded one perspective in favour of multiple points of view.  For me this is quite profound.

And it's just one of many areas that I concentrate on in my lecture, derived from notes in my thesis, which I'll feed into viewmagazine.tv. More to follow.

@
@viewmagazine the cube you show us is really amazing!
Posted by Dr David Dunkley Gyimah at 11:35 pm