The victorian Laptop - Ode to the type writer 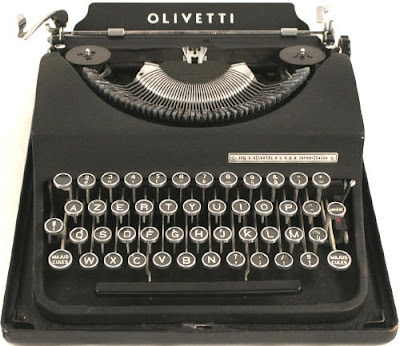 The type writer's last rights - a device of the analogue age. A laptop which did not use electricity and had no luminance screen.  A device that required 15lb/in of power to work. Thud!

And with it, the curt swipe of the paper, with the unfinished sentence.
The waste-bin in the corner strewn with scrumpled papers that didn't make it in.
The illusion of being Kareem Abdul-Jabbar and the plastic B-ball mount - Lakers rule!
The stuck "w" which you always had to pull up.
The "A" whose label had all but disappeared. Which key again?
The ribbon that annoyingly became a twister in the spool.
An aesthetic impulse where an idea lingered that much longer before it was pounded on paper.
Films that were defined by it as prop and part actor: All the President's Men, The Shining and a host of Noir.
The thunderous sfx of its keys guaranteed to have the neighbours banging on your wall at 3 a.m in the morning as you fought writers' block.
And the literally "medium cool' effect it had on friends of the aspiring screen writer.
Happy retirement
Posted by Dr David Dunkley Gyimah at 10:57 pm