A first for social network apps, yesterday at one of the UK TV calender's most illustrious events, twitter beat the best of TV News.

Well not exactly twitter, but its engine combined with the programming might of CNN's 2010 world cup presentation.

Tis the season of awards and sandwiched on a table between Channel 4's Dep Ed Martin Fewell and Mark Stephen's (Julian Assange's laywer) I mulled over whether one of my strong selections two months earlier would materialise.

That is did was satisfying given the strong field.

As a juror for this year's Royal Television Society Awards ( RTS) and for the past three years, the playing field for innovation certainly has changed. 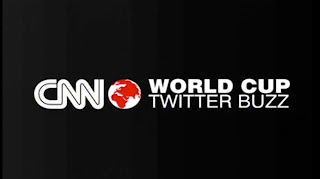 From Newsnight's 10 Days to War ( I interviewed its creator, Peter Barron, now a senior executive at Google) to today's concept from CNN, this was simple but ingenious.

Using a spatial matrix similar to Maramushi, here filters plumbed to twitter feeds would influence the size of the visual data. The more popular a subject e.g. England's disallowed goal, the bigger the matrix.

Twitterbuzz as CNN calls it married the echo effect of Social Networks back into the news chamber, allowing presenters to talk about the relevant subject on a live show.

This is what I wrote about it when I combed through the judges pack in December 2010.

"For me this use of a tool currently part of the digital media zeitgeist has found a worthy home in the broadcast world. The manner in which it was used exhibiting a global conversation in real time has huge added value. Reminds me of Maramushi – a site that tracked google and presented the news spatially.

Ben Wyatt talking about the archive option providing historicism of the debate and the calendar option was a good touch.  This has statistical analysis for broadcasters in understanding their users via looking at trending, archive and following up with targeted programmes. A simple app expanded past its baseline use. Next to be used in Politics and culture?" 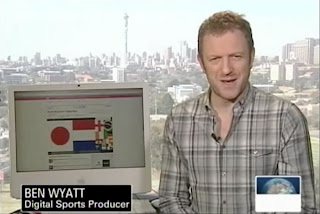 CNN didn't exactly have it their own way. In contention was the BBC's Live Page which combined expert analysis, comments, video and user feedback during the Chilean Miners' rescue and ITN's Instant Polling which you would have seen during last year's UK election, with their live tracker giving instant feedback to viewers' reactions to the leadership contest.

Away from the awards, more recently a piquant use of Twitter mashup, which is playing a role in today's Irish election, though how much is questionable, is this popularity gauge in the Journal. 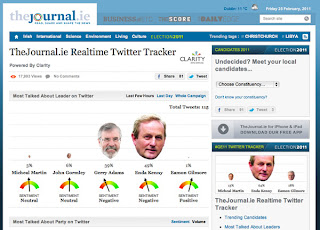 The work of Professor Barry Smyth and team from UCD, twitters imbrication with main stream media appears to have found a cosy bed.

David Dunkley Gyimah is a Knight Batten Innovation in News winner. He is a senior lecturer at the University of Westminster and PhD candidate at the SMARTlab at UCD. He's been an RTS juror for the last three years. His videojournalism work with a new generation of Egyptian journalists from its state TV over the last three years can be seen on viewmagazine.tv
Posted by Dr David Dunkley Gyimah at 12:41 am