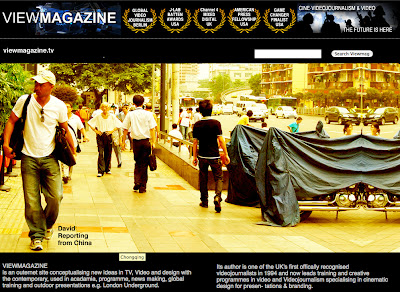 The flaneurist mediaist - PhotoVideojournalism in China. David roams the streets looking for material to film.
From Wikipedia
The term flâneur comes from the French masculine noun flâneur—which has the basic meanings of "stroller", "lounger", "saunterer", "loafer"—which itself comes from the French verb flâner, which means "to stroll". Charles Baudelaire developed a derived meaning of flâneur—that of "a person who walks the city in order to experience it.

Inspired by two separate but connected incidents today I set about an experiment of sorts.  The first catalyst was my PhD supervisor noting my latest submission.

Sometimes I wonder whether it's possible to abandon critical theory in unveiling the molecularity of a subject, and instead opt for a historical account,  as many have that reveals and connects events previously unnoticed.

The second was Adam Westbrook's dissection of The Sartorialist. Adam does a wonderful job in deconstructing, which led to a couple of things catching my attention.

Firstly the movement of the camera and subject which created a poetic distanciation. Secondly, the close ups - the affective shot; and lastly when Scott Schuman says he just does "it". "It" being the creative process, what does he mean?

It is a given, if that process could be revealed as a formulae, it would be prized.  It is the "it" that I am at pains to do justice to, as a process to decipher.

The Creative It
In essence the "it" is beyond common sense and reasoning, Your subjectivity extends beyond the norms of 1st degree sensations. It is not external but becomes internalised; you feel it. You become lost in the process as the viewer watching "it".

This is pure cinematic, as opposed to cinema. And sometimes the sensation is so grand, so cosmic, you're in awe.  This is not my extempore, but those convened from Metz, Kant, Deleuze.

For the likes of Schuman and anyone else who has spent long enough pondering or working their craft. "It" is their DNA. It cannot be transferred. It's you voice, the conscious becoming the unconscious.

Right, so back to the inspiration. In and up to the edge of the 20th century, the photojournalist, photographer ruled when it came to the profoundness of the image, as opposed to the cineist who excelled in the moving image.

The invention of the word Videojournalism, and its deconstruction, which we've  set about doing as a body working with David Hayward BBC journalism College, and Paul Egglestone from UCLAN, leaves open several experiments.

Now at this moment in time, there are scores of photojournalists who might shout never. Nothing beats the still image. Its immanence; the fact it is still capturing that singular moment defies any other logic for a contender.

Paintings vs Photography
But history tells us otherwise. We only need to look at painting and the revelation of perspective and Brunelleschi's, work in the 15th century. So for at least five centuries from that point, nothing could challenge the dominance of the still image as executed by painters.

Curiously our swiftness to be dismissive is redolent of that age old saying from Plato that in effect our knowledge is only as good as that we are conscious about.

At one point everyone, intelligent men and women believed the world was flat. Elsewhere social theorist Clay Shirky reveals how change takes place over years and not months and weeks, which we fight each other about.

So change is practicable, and the framework that often defines that nestles in trend extrapolation, new philosophies and the unknown. Yes and there are the obvious quack ideas.

So back to the idea. Today, I set about as the PhotoVideojournalist out to capture events. A sort of realism, where people at work would just by being reveal a bit of themselves.

That in itself may have little consequence, other than how people react to different systems: video and Photos. A photographer takes a single image, so the subject is attentive for that moment; in video, there lies a different behaviour, and the series of images are rendered obstinate without sequences or filmic meaning. Oh dear!

Next I plan to see, utilising Vertov's notion of the loop, which we used in some award winning work in the 1990s, to see if I can affect a classification near to the affect of the image. By coding it in Flash using Action Scripting 3 I can sustain the loop, so the image revolves slowly enough - a liquid image- before the user changes the scene.

The next step which I'm talking to Jude Kelly at the Southbank should complete the process. :) I hope to return to talk about that.
Posted by Dr David Dunkley Gyimah at 9:55 pm