If thoughts are the pathway to impulses: you think and so you do, why don't we give "thoughts" a hierarchy in news filming?

We do in literary journalism: Minister what did you think? Yet so far we fail to give it enough precedence in non-fictional filming.

Our thoughts; the subconscious are unsecured, unguarded and if anything giving it prominence in filmic narratology may open us up to not just thought, but intent, which is convictable.

Man: Yes I was going to murder him ( film shows how)

In the plastic arts, such pathways are encouraged; they're the stuff of flashbacks, entertainment par excellence as in Minority Report or Dream Sequences: Jacobs Ladder and last year's mind bender Inception.  Mental content directed was the basis of Intentionality by Husserl.


Memories from david dunkley gyimah on Vimeo.
This video references the past, but not just as literal recordings of events ie news, but an essay, reflexive thoughts, that could be the basis of non-fictional interaction.

In non-fictional, the canon of "cause and effect" and evidentiary purpose leaves "thought" still a figment.

Evidence, what you see and hear from an event only acquires the status of fact if it can be tested, both outside the discursive arguments by people of repute. As Bill Nichols puts it: "Facts become evidence when they are taken up in discourse; and that discourse gains the force to compel belief through its capacity to refer evidence to a domain itself"

Policeman: Tell me who saw you thinking this?

Doesn't quite work, does it and only in films do subjects interact with each other in the same plane.  What makes Nolan's Inception all the more fascinating is the shared consciousness - call it social networking dreaming.  Coming to a screen near you. Stick that up your bonny clyde!!

This is all dandy so far, but can it, does it have a legitimacy in non fictional filming? As an emerging currency for videohyperlinking and spatial videojournalism, why yes! The DVD extra now becomes part of the body politik.

This is the emergence of spatial cinema post "24", as captured elegantly by Inception, repurposed not just within the screen but the narrative. See the cube on viewmagazine.tv 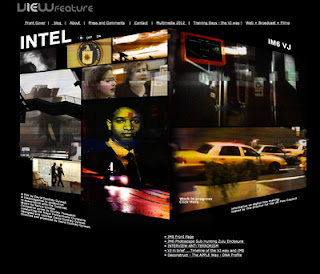 Though limiting at the moment; it was an expression, more than the finished product, it relays screen based frame watching, with a leaning to vid- hyperlinking ( see article that features David's thoughts in The Economist)  and hyper narratives.

And in a world of varying truths, re: wikileaks, what we thought was true and now realise what is and isn't require a bit more than reflexive paragraphs.

We might not give it much exposure now, as we're still locked into a mimetic language of films of record - point and shoot, but as we become more video narrative literate, we'll begin to borrow more from fictional-film.

The power of thought materialised really means " you mustn't be afraid of thinking a little bigger, darling".
Posted by Dr David Dunkley Gyimah at 12:28 pm