The Cathedral and Visualist, and Videojournalist 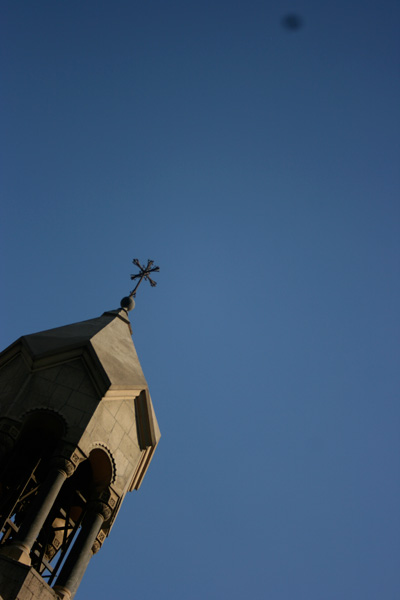 For a moment discard all labels: video maker, videojournalist, VJ, Solo VJ, Videographer and the rest and imagine as you would the following.

You're faced with a scene: an event such as a man running down the street being pursued by another man, wearing a uniform. You watch, observe, unpicking the scene, taking in scraps of information, though that's not how it seems to you.

To you, you're witnessing a major scene and as either a journalist or blogger possess the skills to relay that in text. It reads well, it's real; you're a natural. A man is being purused by a policeman. Why?

Unbeknown to you, you're doing something remarkable aided by your senses, your sensory perception to be precise: eyes, ears, smell, even the breeze of air are being interpellated and interpreted by you.

Unconsciously you're going about a task, not that unfamiliar, for which you possess the ability to make some sense of.

A new scene
Imagine now the scene was a riot. If you're unfamiliar with such surroundings, you may feel intimidated, unsure. You're capacity to witness is heightened, though you may be fixated on particular scenes. The man yelling at the police etc.

You're subconsciously imbibing the scene again, based on differences in the texture, complexity, difference in what would be the norm of the scene. The hundreds of people looking on are not so as interesting as that man yelling at the police.

Then you remember you have a camera in your bag. You take it out and commence to shoot. There's a problem because the settings of the camera aren't giving you an account of what you see unaided.

By now you're spending considerable time on the camera. The world's still turning and for seconds and minutes your attention has been procured elsewhere.

Then the camera works, You begin to record. What you saw with your eyes is being recorded by an instrument; an instrument which intelligently makes a record of what you see, but cannot interpret the events for you.

The camera has yet to become your haptic device - an extension of your arm; the equivalent of the game console for the gamer.

When you play the recordings to a friend, he or she will be relying on connecting the dots in a manner they see fit.

What you didn't see.
But remember when you were filming, the woman standing three metres away crying. To your left 100m a phalanx of youth are storming a building. All around you something is happening; some more engaging than others.

Very little of that is recorded on your device. The youth who shoved the policeman man to the ground did it with a force that had the policeman laying postrate.

You got that on camera, but some how the venom of the shove is less than it appeared in real life. The dazzling of the lights and fuse of colours diffused.

What then if at the point of impact you were in a position to capture that event with the camera compensating for its lack of intelligibility.

In other words laying lower that the two figures you capture the arm foregrounded, huge on the screen and then the shove.  What then you might think would that look like if it were a macro lens magnifying that push?

The account I have just given plays off a logic for consciousness provided by Husserl which I have adapted for my own ends.

Imagine for one moment that your ability to interpret events live, not hindered by a camera, but aided by it. That the ecosystem of the event, not just the panoramic, but the detective's gaze a perceptive figure who reads crime scenes,  was your visual palette.

That your skill at recording unfurled a narrative of questions and answers, but always with enquiry.
That so unconscious are you of events that you captured scenes that in playback surprise you.

The camera has become your eyes. Impulses lead you to film the event, but also frame along the axis of N.E.S.W. ( North. East. South. West. South - NEWS) and then the i-component.

The cathedral that embraces a true account of that event is an unobtainable one, but you, skilled unconsciously at bridging and welding the literary, with sound and video-sight, yield an account of the scene which is emotive.

Unlike the mere physical or mechanical recording of this scene you have delivered an interpretation true to your principles of wanting to tell the truth.

The result is your film: a collocation of reality in life and on your website.

This thing you do is but a strand of your malleability, because the timing and texture of a riot is diadactically different from comedy or the country side - other areas of interest.

Think for a moment if you had a name for this. Videojournalism might do, but its tainted; it appears limiting to others when you try to explain this church to them.

Then you remember from readings of plato that our comprehension and beliefs because they are in perpetual change, at least in liberal societies, that conclusions are not finite.

Every new enquiry which is legitimate opens up discussions to tweak or radically change our positions.

And you can tell us why. This is the growing church of the visual- narrative story teller.

NB Remember your answers to questions are not based on experience alone, but by causal links that are stregthened by rigorous defence. However the more widespread your experience, the more sharing and participation you've been involved in, the more your perceptions and beliefs are changeable. Nothing as they say is finite - even death is contested, religions tell us

Here for what makes a good reporter
Many students have now graduated, some have found jobs, others will join an unofficial club reeling of letters and CVs.

Having been on both sides both in the media; I still have all my BBC rejection letters and then got into a position to recommend others for broadcasters and newspapers. Now, I'd like to share some of my thoughts. More here.


David Dunkley Gyimah is completing a PhD combining experential learning as a practising videojournalist over 16 years and broadcast professional from 1987. You can more about his work and commissions from viewmagazine.tv
Posted by Dr David Dunkley Gyimah at 9:19 am