A tad long perhaps, but this interesting film frames the practice of Vjing. That's video jockeying.

Interestingly, it's now a recurrent theme. "I'm a VJ", which then follows a period of acknowledgment, only for at some point someone to say:" Oh I thought you were a VJ".

I am, but that's video journalist.

So what came first in that entangled debate of the chicken and the egg?

Though the term seems to have become popular around 2000 ie video jockey, you could argue early video artists and even the psychadelics of the 60s might have called themselves such.

Much further back, you could argue Georges Méliès - L'homme orchestre (early film, 1900) and his contemporaries were early incarnations of video jockeys.

Yes it wasn't video, and sound would arrive later, but the lead into special effects around Vaudeville were early incarnations of using projected visuals in live entertainment.

Equally video journalism, the practise, not necessarily the use of the exact tools has its roots bang on film's emergence, with the bolex et al playing a hand in where we are in today.

In practice these semiotics and simulacrum are never quite clear cut, but there is a great deal of common ground and appreciation of form.

One uses music to carry narrative and motion; the other uses narrative to inform music choice motivated by the performance. And then when you watch a video documentary by a video jockey about videojockeying, what then?

And even where there are no obvious mind melds, there's every reason to look at this burgeoning form and ask what can be borrowed, inculcated into either.

Experimenting in the grey zones 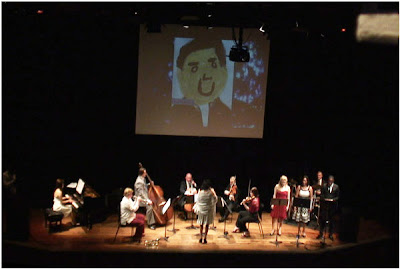 It's in the cracks of semiotics where some of the most interesting and passionate debates take place as much as new developments.

Whether its in the basement jack or the multimillion pound extravaganza roadshow of U2, or the corporaredom of the AV industry, to the heightened launch of the next BMW series behind discordant visual themes, or any number of the zeigeist VJs to the film makers turned installation artists like Peter Greenaway, it's the experimentation of the form that is vital.

Incidentally, one thing that is very common with my shoots, is something called the dance - an as live shoot of a film, bit like drama, where I am being influenced by narrative and music.

You'll find quite a few on viewmagazine.tv and the recent Fight Club piece (posted two day's earlier) or Obama video projected live over Shirley's Classical score are examples of how live VJ videojournalism mixes its form.

So what came first VJ or VJ.

Yes I agree with you. Who cares? So long as you come away feeling nourished.
Posted by Dr David Dunkley Gyimah at 6:32 am