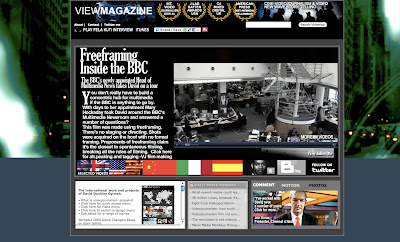 It looks like something out of youtube, which in itself has its own aesthetic, but videojournalism film making is all about different forms and applying them.

I'd probably have preferred going handheld peaking. See 8 days or Reuters for a good example. but freeframing, is the dogsville of filming, surfing blindly not so much as looking for a set, but feeling it.

So this VJ shoot, most likely the only one you'll find on a non corporate site, of the BBCs recently appointed Head of Multimedia News raises a number of things.

Firstly deep thanks to the Mary for granting me the time. She's extremely busy. We met in Podgorica, Montenegro on a training presentation programme.

Mary wasn't excpecting a camera when I got to the BBC and neither was I really in the mood to do a "crafted" shoot.

The intention was for a show around the BBC's new multimedia studios, so while I had my camera frankly its incidental all the way through and I never make any real attempt to focus up or frame. Mostly it's being framed by spatial awareness.

It's evident because Mary and I are actually having a conversation, rather than an interview, and the camera is almost always at waist level focusing up, with me throwing the odd glance at the viewer.

Freeframing
Freeframing is something that's catching fire and the real proponents of this shoot so carefreely, that so what if you hive of a head or get the composition wrong.

If you're a trained VJ it's more difficult, but there is a time and place for freeframing and I have come across many instances whereby it's the only option for the shoot.

In this case, given time constraints and the attention given to the conversational exchange, I'd let this through.

By the way, at Channel One we use to freeframe a lot. Bear in mind we were using BVW betas with no flip out screens, so the question is how did you know what your framing looked like ona fast turnaround shoot.

A more refined version of freeframing is peaking - cf 24. and this short piece on Reuters launching their mobile phone.

I'm going to be engineering variants of this following a summer programme of being an artist-in-residence at the South Bank supporting work which I'm feeding in from my research.

Next week I'll post a tour given to me by the head of the media department at Cairo Univerity - where President Obama has just visited. Here I'm in shoot mode.
Posted by Dr David Dunkley Gyimah at 1:40 pm