Branded content then (1930) and now - How brands are telling stories 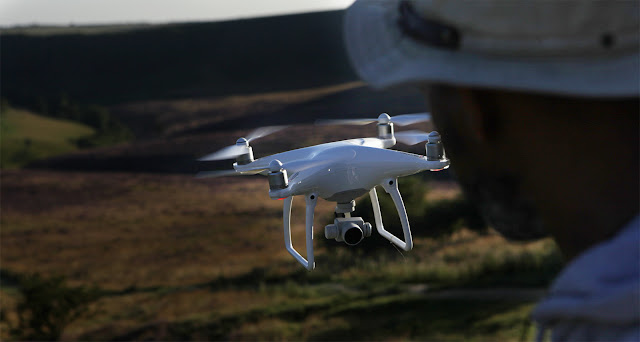 When it was first shown, critics exhorted it as a new form of cinema. Ordinary working class people were for the first time talking to the screen expressing their disgust at their rat-infested slum living conditions.
Housing Problems made in the UK in 1935 today persists as a seminal film — a must watch — in the evolving problematic story form that would be called documentary but it also heralded an early identifiable class of what we know today as branded content.
Its progenitor the great John Grierson relied on funds from the British Commercial Gas Association (BCGA) which would have come as a surprise to the funders that there was not an interview or a shot of BCGA member in sight.
Segue today to branded content about a DNA Journey as men and women in a talking heads format face the prospect of where they’re really form. This populist film reveals its backers only at the end when the credits sayMomondo: Letsopenourworld.com
Vimeo award winning filmmaker Elliot Rausch’s tear-jerking uplifting Star Bucks-backed film includes interviews from the brand but the stars are the people and the filmmaking. The brand’s presence is measured.
The fuzzy blurred line between advertising, propaganda, documentary, news and branded content is a deep seated one. In the 1990s as a reporter for London’s ITV News reporting on Virgin’s move into hosting concerts, one of my interviewers was clear from his research, young people know when they’re being fed advertising gumf.
It was true then and is true now. Note however that in this news piece, the overall style of production is that we readily identify now as news. John Grierson’s innovative form of the 1930s would have elements lifted into news journalism. Today, however, films, including documentary veer towards a cinema (expressively performative) when talking to audiences. 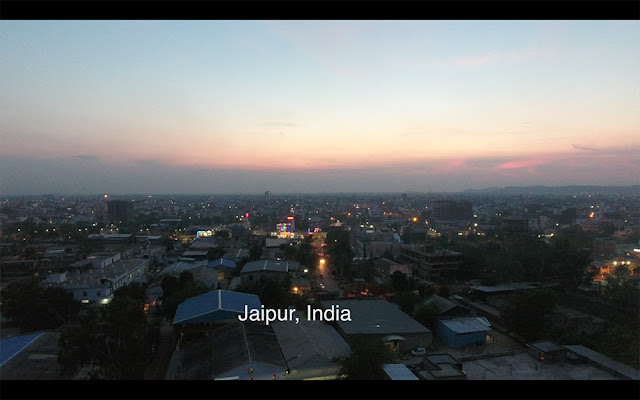 From Indian to Brazil with Love

July, 8th. I’d just arrived back from India from contributing to a conference/project that featured Gerald Ryle (Panama Papers), Nick Davies and Raju Narisetti of News Corp when a colleague asked if I wanted to head to Brazil, Olympic City and Ginga football epicentre, to participate in an event on branded video organised by Fernanda Menegotto of Vbrand — one of the country’s innovative agencies.
The visit would include space sharing with Andre Barrence, the Head of Google Campus SP, as well as Brazil’s entrepreneurial community to look at the importance of video towards their businesses.
I couldn’t go. Prior commitments.
The recommendation, however from our university’s head of International Student Affairs Geoffrey Davies was well received. I have had enjoyable exchanges with Brazilian videojournalists over the years and as cinema journalism styles go, there’s an exciting timeline between Grierson’s documentaries, Cinema Novo and New Brazilian Cinema that feed into branded content.
In the 1930s Brazilian born filmmaker Alberto Cavalcanti became an integral part of Grierson’s team bringing innovative sound and editing skills to the group. His influences include Coal Face (1935) and Night Mail (1936).
Looking back on these films it’s easy to deride their style but their innovation then is mirrored by the blend of international cinema style and social cultural cinema, that is language and myths, that excite audiences’ collective and prosthetic memories today.
In India it’s films like Sholay (1975); In Brazil favourites include: Filhos de Francisco (Two Sons of Francisco, 2005) and to an international audience Cidade de Deus (City of God, 2002). 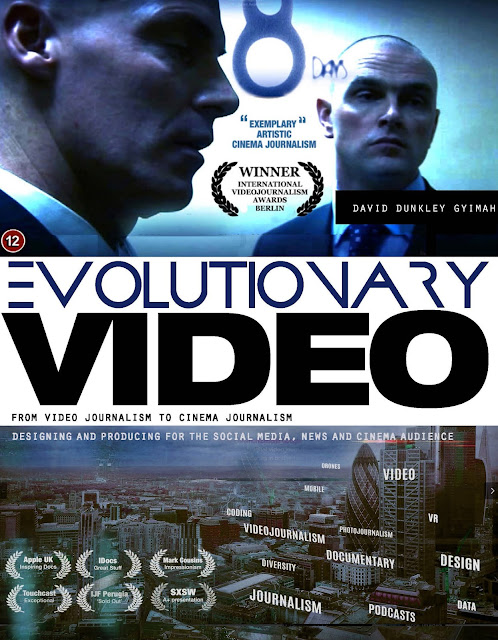 The significant evolutionary changes to storytelling (I document in a forthcoming book) specifically in the last ten years have been the number and nature of constituents telling their stories. YouTube has spawned millions of millennial stations and new stars, and commercial businesses and NGOs e.g. Greenpeace no longer need to rely on their video press release and the largesse of television news for oxygen.
A related development has been the myriad production tools and platforms now available, from the once populist Flash and its pioneers Brendan Dawes, Yugo Nakumura, Eric Natzke, Hillman Curtis (R.I.P) and the Holo group; HTML 5/ Java scripting; Klynt for interactive factuals and Unity for VR.
Yet the growth of video continues unabated, buoyed by increasing mobile phone usage and its indefatigable association with social media platforms, and to cite the seminal Did You Know video circa 2008 there are applications that will include video that have not yet been invented.
There’s a sound argument to equate the creativity of modern video with the birth of film in 1900s. Back in the 1900s cats boxing, and a train arriving at a station amount to today’s viral one-scene videos. Back then as now, the craving for narrative from the audience extended the vocabulary of film.
That’s happening now with some caveats. This decade has seen a crystalisation of a new market place for creatives. For instance:
Despite these, client-focused work can still seem choppy. In part because CEOs and FCOs can be wedded to legacy practices of story telling that use:
a) traditional account management — agency-producer-client relationships.
b) production techniques for brands derived from TV production tropes.
b) traditional pricing structures. 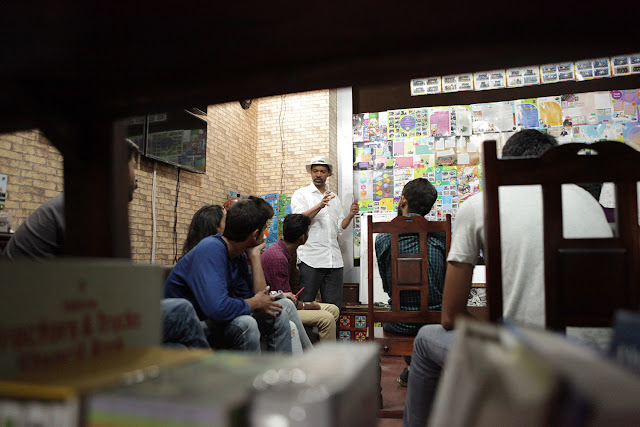 I reflected on these at a conference last month as part of a project that wrapped together my approach to branded video and entrepreneurial storytelling.
Despite their differences, there are similarities between India’s approach towards improving mass connectivity and its benefits and Brazil. Index cites an India policy paper: “India: Digital freedom under threat?” when talking about Brazil’s prospects stating:

The internet represents an opportunity to fill in the socio-economic gap that strongly divides Brazilian society — especially in terms of education, access to information, and access to freedom of expression.

Twitter, Google, and Facebook played an important role at Talk Journalism’sconference aware that the eye of the prize is India’s untapped unconnected and the new business ahead. After the conference we set in motion our strategy for a video based around Rajasthan’s municipal government taking a round trip just over a 1000 kilometres by car to reach a village near Udaipur.
Our film evolved around a young Masters graduate in Social Studies (in blue below) employed by the local government to work with villagers to launch business start ups.
It’s a huge social programme backed by World Bank finance. The graduates involved, some eighty of them, have to commit a minimum of two years to the project living within the communities learning their hosts’ customs and dialect.
Schemes in which villagers are loaned money are not uncommon in India, but the government says it’s learned from previous mistakes and the new programmes involve locals have a greater say in the administration. There’s competition to succeed and to pay back loans so others can borrow money too.
The shoot took 2 hours using an array of tools e.g. Drone, GoPro, DSLR and Mobile which constitute part of the cinema journalism’s strategy for visual language storytelling which I have been involved with a number of practitioners in recent years.
The first draft trailer preview of the film, which is going through post should be released next month. 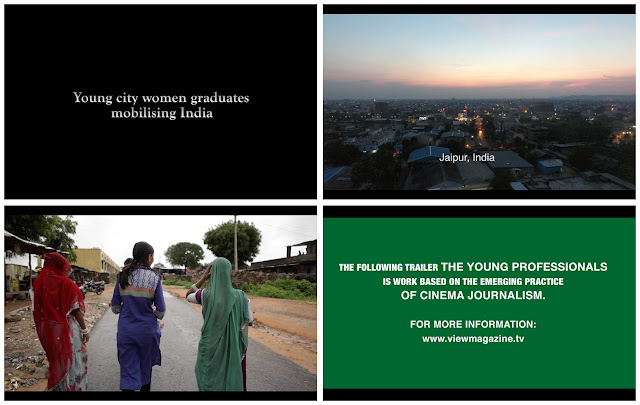 What happened next was equally exciting. We (the producers and I) spent two afternoons delivering a Master class to Amity University students to become the filmmakers for the lengthier film above.
Ten documentary, film and photography students were chosen, who are set to film in a number of villages in Rajasthan in their style of cinema journalism.
We’ve devised a plot to produce the resulting films as one epic branded narrative, called One Day. This dual pedagogic cum business approach was a feature of an award winning film 8 Days in Berlin which showed the UK’s regional newspapers producing video for the first time as content to rival the BBC in 2006.
The entire scheme which incorporates a strong level of student-professional engagement, pushing at the philosophy of film innovation, undergirded by tech e.g. drones has started talks in with partners in Ghana, South Africa, Thailand and we’re talking to friends in Russia. It’s something we should be doing more of in the UK.
For more information on this scheme and others, you can email me at David@viewmagazine.tv . I teach and train a variety of people from corporates to students, from around the world using different methods and kit, such as Beirut, near the Syrian border, China, and Cairo. My websites arewww.daviddunkleygyimah.com ; www.viewmagazine.tvandwww.videojournalism.co.uk

Posted by Dr David Dunkley Gyimah at 12:42 am