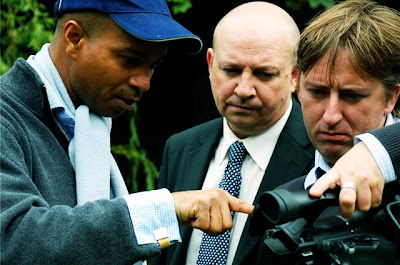 David with VJs feeding back comments on shot

I had one of those eureka moments with a colleague of mine Steve May who runs e Script writing on the Masters in Film on campus.

The upshot of our exchange is that in a couple of weeks I'm pitching a film idea at a script session organised by Steve that includes producers from the hugely successful working title.

As Steve put it, you'll get some very good feedback, if you're up for it and I'd like to work with you on the script.

And in case you're wondering, the three act tale with arcs, so much a feature of film making has been part of video journalism for the best part of ten years, is one of them.

For about 20 minutes we stood in the court yard ping-ponging film talk at each other.

Steve: As far as scripts go, it's not one of the classic thriller script but what makes Bourne work is the editing and Greengrass' sense of tension. For classic thriller go see Marathon Man.

Me: Yes, but its his tagging and blocking - derived from documentary making- also a feature of video journalism, and dramas like Homicide that makes Greengrass's stuff edgy.

Steve: the docu drama look - if you look back at some of Cecil B DeMille's work you'll see this at work.

And so it went culminating in Steve asking me to come and speak to a group of film makers about the video journalism approach.

What we all share in common, I suppose is, character development and the metronome of story telling.

By the way when I say character development, it's in part a reference to the central characters in a piece and whether or not they're suitable for the piece.
Posted by Dr David Dunkley Gyimah at 7:19 pm