Tis a term, at least now it is: rabbit hole.

I feel like being down one just now with a sea of ideas around me.

I took the pic at a Sunday Pub Lunch somewhere in Warwickshire. And yes there were bore holes that looked like drilling sites from these fluffy creatures.

Elsewhere there are shake ups at the BBC - huge ones, so one idea I had has to be put on hold.

Sabaa's one minute film festival is doing well with a new mention from Wired Magazine. I'll post some more on this later, but meanwhile go visit and vote.

Could this be the future classroom? It looks like this now on paper at the uni where I work.

And in a couple of weeks the new set up should allow all manner of digital digiratis to go on - all with the purpose of improving the experience for students.

Skyping with other lecturers into a lecture, having remote control over the screens... plus some mash ups with different disciplines.

This is an altogether different one though Holovaty was the first I known of to point to data being used in such an innovatory way. Watch the report here 1995 National Press Club 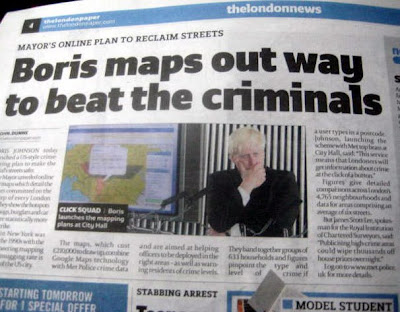 The Mayor says it will help them target crime pointing to how it helped New York.

You can find out the best and worst of London by going to www.maps.met.police.uk and inserting your postcode.

My area came up "below average" .

Estate Agents, however are nervous as now you will now be able to log on and discover the worst areas in London.
Posted by Dr David Dunkley Gyimah at 2:00 pm