Video journalism film - I want to know the technical

It's one of the more common responses to open presentations I have given e.g. Apple, and I do often apologise for not being able to meet every one's expectations.

Some turn up just wanting to know what's possible. Others want a detailed break down of how a particular project was achieved; the story behind the story.

I'll hopefully be posting "the making of" with the global entertainment filminute film.

As with any project some of it is technique, then the rest inspiration and serendipity. It's often a mishap, but it works because you've made the mistake in a fruitful area.

It's the equivalent of a footballer sticking his foot out when a cross comes into the box. You have to be in the zone and then either by design or pure chance the ball connects with the footballer and goes in.

Which begs the question is there really a creative process in this thing at all.

Maybe part of another tutorial should be getting yourself into the zone.

Paps do it and then sit patient. Have you noticed then as soon as their subject looks up, a torrid of flashes fire off?

Except, often artists conceal their inner workings or find it difficult to articulate why they did, what they did. 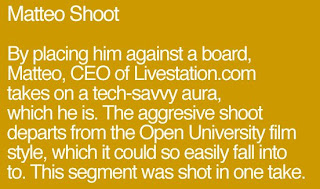 Some also consider it a bit rude when asked about their inner workings.

Coming back to this idea of making mistakes, I'm aware that the most common mistakes come good occur in compositing video. I know what I want to achieve, through technique, but will often be unaware what's set to come out.

When it works that's a joy

I know when I definitely don't like what I see, but that's rare.

But what is really prevalent in shooting is how I have come to discard my first thought for the visual narrative. Too easy is my thought and I'd like to be surprised as the viewer.

For that it's figuring out in those few minutes the best "other" place to let the lens follow the action and how that pushes the literary narrative.

Ahh one thing rarely spoken about but so much part of my unconsciousness is how to adapt your metronome to the subject matter.

All visuals have an internal clock. In Chemistry I'd be telling you they work at different entropies and you wouldn't bat an eye lid.

How are you shooting her? Bland? Aggressive? Sympathetically?

And quite often these tells are NOT so obvious, BUT make a profound difference to the outcome of the film.

Film language's subtlety which is exploited by directors means you, the viewer, often can't say why you like a film even when there's nothing to like.

It boils down to visual journalism, something graphic artists are adept at, rearranging space.

One of these typographic messages is used at train stations. Can you guess which one?
Posted by Dr David Dunkley Gyimah at 5:41 pm