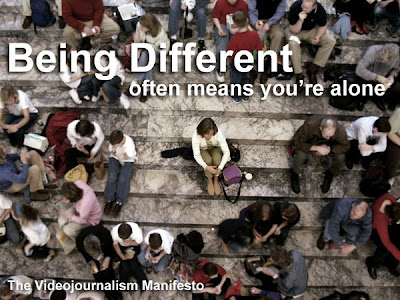 Yes. Obviously and what a daft question. Those in favour say aye. Aye!

No. Well it depends what you define as video journalism.

If it's a news piece created by a traditional camera operator/ a journalist/ citizen journalist, is that video journalism? Those on the left say naye!

OK then this is a question of semantics, and frankly who cares.

Lots of talented camera operators e.g Claudio Von Planta have been making docs for years with beta cams and now he uses the Sony A1. But he does not call himself a video journalist.

He is a dv director/ producer, who edits and often voices his own reports.

Does it matter then what we call ourselves?

Does it matter who we are, or once were, so long as we're operating the camera beyond the traditional function of the camera man/woman where a director directs you to shoot, and a producers produces a crib sheet about whom to interview next?

Probably not one jot.

Perhaps it's a tad ethereal at the moment, because videojournalism embodies more of a style, a sub culture come good over the years, an attitude to the way you work, aided by guidelines but not constrained by them.

You're a Pollock action painting, and you only know when to daub the last stroke.

Sometimes, they'll get it sometimes they won't, but you hold the video paint brush and each time you think of a piece, its execution is different.

Consider this, 50 years of being told that's the way it is, you've finally been told "go make" but forget everything.

It's in the story, the execution, the follow on, the camera thinking, it's anything but zoo tv, but it's something that's supposed to be unlike anything we usually do.


BBC Presentation
In 2001 I presented to BBC Management in Birmingham. It was their first foray into Video journalism.

After my piece, one manager commented.. "Yeah, Phwer but that looks like normal TV" and he was right. All the films stemmed from the mid on 90s, shot on beta cams, and pretty much stuck rigidly to a visual language we all know too well.

A couple of years on, I thought:

"If you could combine the art of motion graphics and photography, the mis en scene and arcing of cinema, the language of television, the skill of radio broadcasting with users behaviour online, I believe we'd be closer to understanding the power of Video Journalism."

In the end if its good story telling, does it matter?

David Dunkley Gyimah is one of the twelve international judges for the 2008 International Video Journalism Awards in Mainz, Germany, the birth place of Johannes Gutenberg who revolutionised the world with his printing machine.

To submit a story and learn more about the VJ awards go to www.vjawards.com/
Posted by Dr David Dunkley Gyimah at 6:20 pm