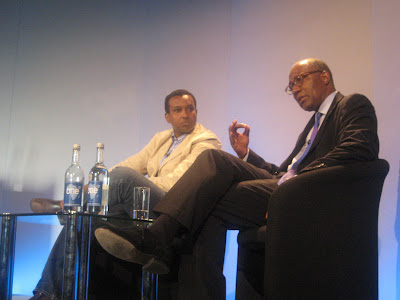 If you work, or have aspirations of working in British television and are a minority then former tv presenter/producer turned Race Czar Trevor Phillips' findings co-published with Channel 4 may bring some comfort.

[Trevor could be described when he worked in television as Britain's answer to a Bryant Gumbel. Well respected, he was everywhere]

I got to speak to him at the end about how new media could drive the new economy. Trevor agreed. [luvvie fact (this is for peter@ shooting by numbers, who called me a Luvvie. I'm wounded @££!£$@

When I worked in television we shared the same agent, so at least he remembered me. Now what!]

I also bumped into an old friend Rageh Omar. We did our "arm reach-hug". I guess fist bumping's out of fashion after the New Yorker- Obama spat cover.

Never did get the cover's monty python irony folded on itself.

Rageh and I had a good short-power chat and I hope to bring you a vid interview with him in the future. Around 1993/94 we both freelanced for the BBC WS, African Service. Gosh! Those were the days.

Also there and friends from the past the talented tv maker Geoff Small, Guardian/BBC Radio 4's Safraz Mansoor ( we were at Channel 4 together) and the lovely Marcia Williams, exec at the UK film council.

Role Models
Meanwhile the Government launches an initiative to find role models, black role models. But how do you judge someone as being a role model? I have posted a short clip of equality race champion Doreen Lawrence on Viewmagazine.tv( she lost a son, murdered, in the 90s in race attack)

Dr Rachel Armstrong, Bruce Damer (all Phd smart labbers) came along to the channel 4 conference and we have some pictures to share with you.

And coming soon, finally the Apprentice. I'm close to cutting the package sent to me from South Africa which was turned into a mash-up prog.