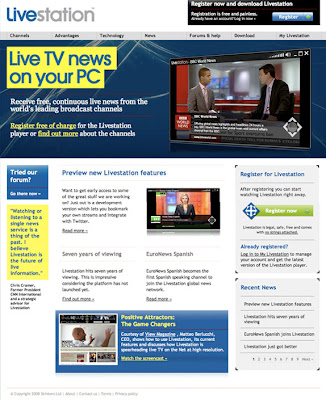 It's a future of the net and tv broadcasting that is so obvious, and bucks the idea that appointment TV is dead.

And linked to trend extrapolated developments e.g. faster broadband speeds, wified cities, is, what's the expression, "a no brainer!"

Live TV on the Net in HD quality. AND, and you don't have to be a broadcast outfit to participate.

Imagine the BBC's I-player, but an interface so elegantly designed that allows you to watch live programmes going out on the BBC, Bloomberg, or your own station at any time.


Simple Set Up
Here's how simple it is.

Via a connection from your server to the outfit Livestation; your ISP will do it in a matter of minutes, you're then broadcasting in real time. And, and there are no set up costs for going on the platform.

There is a revenue sharing scheme which you'll work out with Livestation.

If you're not a broadcaster, you can make up your own bouquet of programmes, and produce a loop of programmes - a bit like Sky or BBC World Service.

So far those who have signed onto Livestation include: the BBC, Russia Today, Bloomberg, France 24 and Al Jazeera

So imagine that, Steve Garfield TV Live, Geek TV from Las Vegas, Rocketboom Live - all popular Vlog/ video outlets or even Viewmagazine.tv (menu showing on right) live on your laptop whilst having an expresso.

From what I know a number of brand publishers are keen, and it also has a strong future I believe in hyperlocal TV.

If you're a publisher biting your nails about the onslaught from the BBC's hyperlocal Online launch, then this is an option.

The key here will be original content, and being in amongst branded outfits. 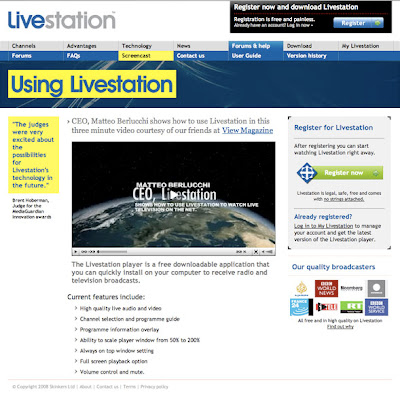 How it works
I was over at their office and so taken that I made this "how to" for Livestation.

"how tos" can usually be pretty staid, a sort of 70s Open University approach, so I have introduced trade mark video journalism "tagging".

The video pretty much explains everything.

I washed it through after effects and "crushed" the blacks to up the video tint.

You can see the final cut on " Livestation.

The Future of TV
There's an endless stream of debates concerning what the future will look like, but frankly this isn't rocket science as illustrated in this Outernet Promo made in 2004.
Posted by Dr David Dunkley Gyimah at 8:19 am

Thanks so much for the link and inclusion in this post...

My mom was recently interviewed by ABC News.

Here's a link to the resulting story as broadcast, and an 11:00 behind the scenes recording of the full interview that I made with my Nokia N82:

Also in there is an archived clip of me going live to shoe the ABC crew live broadcasting from a Nokia N95 cell phone...

Here's a post I made looking at how long exactly y mom was on camera speaking:

Now here's a post I just made showing the poor linking and embed strategy of ABC news...

There's a lot to learn from this experience...

This may very well be the catalyst of what I have written about on solovj.com on the topics of online content distribution and the business of solo video journalism.

Those who are like minded in working as content creators in the minimalist Zen like paradigm of solo vj'ism can now look at niche programming and develop one's own unique branding, vision, what have you of what it means to broadcast those topics that are relevant to you and those who would also find the content important enough to view.

The biggest challenge still is finding revenue to support such ventures but it seems that this is being ironed out as well according to Mark Glaser over at PBS Media Shift.

These two issues IMO, are the death knell for as you put it - "Appointment TV".

Add to this the ability of vj's to create their own version of local news broadcasts and the flood gates are opened up - no longer is the public fed filtered news based upon corporate news media agendas - all news will have its unique viewpoint - and that's not necessarily a bad thing.

Gota say there have been a few meetings e.g. broadcast and mash conferences where your blogs come up so I have been looking your way for a while.

Saw something you did with the Nokia and a snazzy car.

Hows your mom taking all this fame?

Cheers and I'll draw some eyes to the links you sent

Yes it's all evolving - a soup of digital DNA.

Seems to me there will be some cohabitation between VOD and Live on the web.

Watched the uptake.org broadcasting live from Minn - twin cities and thoroughly enjoyed it.

Nice meeting you here in your comments section...

My mom loves all the attentions she is getting...

It's fun figuring where all this is headed...

Hope to see you in person some time...