Where next for technical videojournalism news? 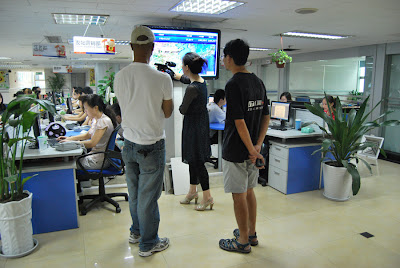 But yes technique alone doesn't cut it; there's more to take on board about "the self" . I'll post on this in the future. The self is more subjective, revolving around experiential learning. But the job, the job? I need to complete what I need in as swift time as possible and get it out looking within the aesthetic I fashion on sight of the report.

We're back to the making the film in your head as seen online, with no edits. It involves visualization skills - eked from Arts practice. ( See Collision- When Artists Collide)

In China: Videojournalism
Take the following. I'm in Chongqing China, I'm interviewing the management team of well known Net firm about what they do. It's an open question, which frankly I really don't need, but it provides so many windows of opportunities. The photo above shows me engaging with my subject, but there's an element of guile on my part, to prevent them from acting or being directed for the camera. 2 using the filmic space
So, one minute I'm filming and engaging and the next minute I have moved away as she is busily focused on explaining an action. She hasn't noticed and will likely not know I'm gone for about 4 seconds. I have picked up a relevant ( *in camera) sequence. This points to a major principle of videojournalism film making, which I'll put in bold: Film around your subject, don't direct them; the less intervention, the nearer the reality. 3. Re engaging for the question
I then set up for a question I'm needing to ask, which is a closed question. I regularly judge my mediation, a bit like the corporate press officer knowing when to intervene. and often depending on the nature of the report will tell the interviewees what I will use.

This sets up an interesting reflective, when sometimes the interviewee will prefer a quote wasn't used. That's the exchange I believe the viewer is interested in. In this case the parties were fine. 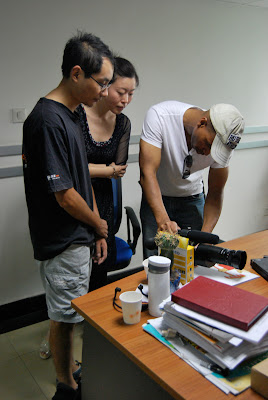 4. reviews. Using flash cards for reviews
Below where next for videojournalism news?

Werner Herzog said, they're all movies..

We professionalise the moving image in the view to making it inimical to anyone not in the magic circle. It becomes simplified through pecuniary means, and hostile in its functionality to those on the outside.

TV, the music business, the army - all socially formed structures of work adhered to some form of insiderness.

Videojournalism is the latest, but it's different. In 1994 it was insiderness; in 2010 its externalised and its rebirth came in public view. If you missed some of the 1994 incarnations go here.

Now, you even know some of the terms: GVS, Stand up; you could build a videojournalism outfit from reading manual notes online.

The trouble is with news as a form of 21st century discourse. It has many things right with it and wrong. The burning flaw is wanting to tell stories that have already happened.

We find that unacceptable for doc making, unless there is a denouement or we find new revelations, but we tolerate rehearsed action in news, in videojournalism.

It's a curious notion, because the concept of news is among many things, new! But the news construct is built upon events that have in many cases already happened, with an attempt at finding a means to divulge that material in an accessible way.

Its worked thus far, but now a more intelligent viewer is beginning to see and chuckle at the cracks. So videojournalism, TV News seeks more of the dramatics and in the absence of action this has to be constructed within videojournalism's cinematography.

The difficulty is to be less rigidly tied to formats, but to devise one's own. That I'm afraid will take time; the innovation reside in individuals, subjectivity of the news may now be tolerated if you can demonstrate professionalism to the audience.

That's not to say structures will ever disappear. We build them all the time, once we get momentum. The innovator has an option to sell his/her ideas for followers.

Now, it's like the running of a top Formulae 1 Car. They (F1s) all run at more or less near enough the same speeds, but modifications from the pits, by technicians and engineers' wit with years of experience makes their difference.

So in distinguishing content ( the F1) from process (the pit experts), we're back where we begun...Werner Herzog saying they (news, docs, videojournalism) are all movies..

But then Herzog is a supreme pit expert.