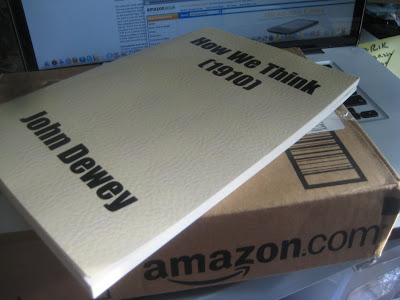 The book that arrived at my home had been eagerly expected and the postman, a jolly fellow, telegraphed its arrival through the frosty front window door: "Parcels sir".

Ahh there it was. And yes this book was special. John Dewey is an icon of western philosophy and social reform and his book: How we think (1910) is what we might call today a game changer.

Bowling Green state university, voted recently one of America's best colleges, recounts the views of a scholar Dykhuizen, who described Dewey as

"a major figure of American intellectual history, is considered to be one of the few Americans of the twentieth century who"...can be acknowledged on a world scale as a spokesman for mankind"

However if you're a defender of American scholarly work or books for that matter, look away now. No, actually recant that cliche, please keep reading.

Dewey gets into his prose explaining one of many stories. I have displayed a portion, which says:

The story is told of a man in slight repute for intelligence, who desiring to be a chosen selectman in his new England town, addressed a knot of neighbors in this wise.

Except the text in my newly delivered Amazon book reads and is presented as follows:

The story
consecutive 1s to 0 a man 1 n sSnt repute for intelligence who, not merely desiring to be chosen selectman in his New England a sequence town, addressed a knot of neighbors in this wise 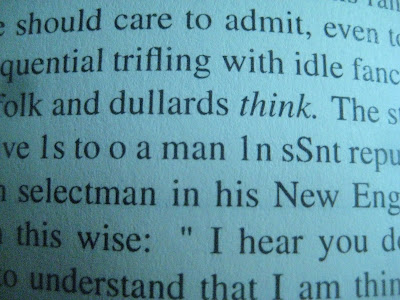 Printing errors from the book
And these illegible prints continue through out the book, 20 - 30 mistakes on a page.


Book Theft
The publishers behind this go by the name of General Books. When I could take no more of the gibberish I looked in the book to find a small disclaimer. It says

Limit of liability/disclaimer of warranty: "While the publisher and author have used their best efforts in preparing this book, they make no representation or warranties to the accuracy or completeness of the contents of this book and specifically disclaim any implied warranties...

"We have recreated this book from the original using optical character recognition software to keep the cost of the book as low as possible. therefore could you please forgive any spelling mistakes, missing or extraneous characters that may have resulted from smudged or worn pages?" 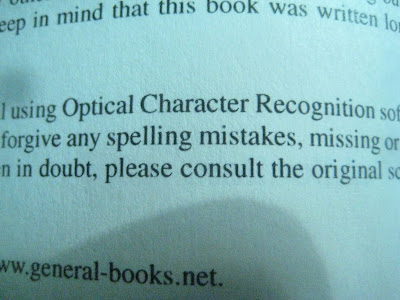 Well to the latter, No! In less than a month I'll have around 40 Masters students and soon afterwards 40 International students and I don't doubt for one moment that if I placed passages of this book in front of them, they would find it acceptable.

But here's where this saga takes another uncomfortable twist. Amazon endorses this publisher, the book arrives courtesy of Amazon, and when I made an attempt to get a refund I discovered I would not get the full amount. In fact they will only remittance half the cost on the basis the book was defective.

Why become a journalist
Now, this is why I became a journalist. This is plainly unacceptable from both General Books for selling a product not fit for purpose and for Amazon complicit to this and denying a full refund.

In fact in a more progressive world of customer service, there would be an effort to ameliorate this sorry affair. But lets forget that for a moment.

At this point, I could take the more common sense approach and say I will no longer shop on Amazon, but despite my spending a fair amount on books on the site, I know that will have no effect.

People power and boycotts in the day, has a different effect for the bottom line, as Nike found out when it offended black Americans, Moslems et al over the years

But this: the company versus the individual addressing their rights, is what I wanted a voice for. It's theft. No different from going to the cinema and finding the film is a copy version, a bootleg, with non- native English speakers speaking English.

I'd demand my money back.

What others have said
The last bit to this is despairing, but Amazon's page on John Dewey is replete with customers who have been taken in by this. "Read the review before you buy a book!" you might say.

Well, not everybody does, I often do. But the two best reviews have been placed at the top and the critical ones have become side shows below. Subterfuge some more. Here's some of the posts:


Phi Stone writes a month ago: 1.0 out of 5 stars
Unreadable. Buy a different copy.
This book is completely different than the preview version and the OCR text is unreadable. Dewey is good reading, so buy from a different publisher.


This from an anonymous buyer: 1.0 out of 5 stars
This is a Bootleg Edition
This is not the same edition as the one that can be viewed on this page. There is a disclaimer in the front of the book that states that the so-called publisher "recreated this... Read more

And from M. Schwieterman 1.0 out of 5 stars HORRIBLE
This book was automatic digitization gone wrong. I don't think anyone looked at this before it was printed. There are jumble words and phrases throughout. Read more
What you can do?
If you've been displeased by this and would like to be part of a videojournalism report please let me know. It may mean doing a short video of yourself talking about your concerns and we'll put it together as a global videojournalism report.

Fifteen years ago, I made this report for Channel One TV, a housewife who so riled by the attitude and road humps brought in by her municipal council she campaigned to have them successfully removed. The report at the time was nicely received by viewers.

Fifteen years on I think we can do something more appropriate - a film and something along the lines of this vlog butterfly and video promo I made interviewing a senior BBC figure and was picked up by various credible news sources such as journalism.co.uk

So please get in touch. See you on viewmagazine.tv Hopefully we can do something for this nonsense to be more widely recognised and daren't I add, stopped.

Added 26th August - Update
Since writing this post and contacting Amazon I received the following, so good result!

I see you printed a return mailing label from our website; feel free to throw that away. We won't charge you for printing the label.

Note: The label you printed can only be used to return the "How We Think (1910)" from order #XXXX If you want to return another item in the future, you'll need to print a new label.

I've requested a refund for $14.54, the cost of the item, shipping costs, and the import fee deposit (if any). This refund will go through within the next 3-5 business days and will appear as a credit on your next credit card billing statement.

Posted by Dr David Dunkley Gyimah at 7:26 am