Corporate PR videojournalism- look at this now; all else please ponder 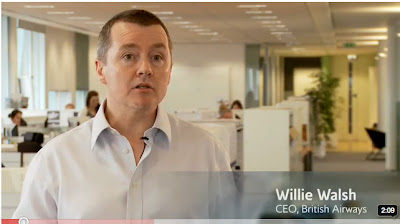 British Airways' protracted dispute with its staff, supported by their representative union, Unite, had a curious moment for me in spring.

The potential strike action surrounded disagreements over pay and conditions for cabin crew, which may still flare up in the future.

The message from both sides was being fought in the glaring spotlight of the news media, except look closely and British Airways' Willie Walsh was playing an interesting hand.

On several occasions instead of answering to the media for interviews, BA's corporate video arm FlyBritishAirways filmed Walsh and put the video out for the media to grab, and they did.

For PR firms this was a major coup; the YouTube era was batting on both fronts and since the media was in HD, a simple download or access to the main films would suffice for television - though there are few artifacts to correct.

This command and control delivery of media represented a big breakthrough for corporate PR, and banished some old ghosts and many corporates also run their own video news e.g. BP

Firstly for a running story as newsworthy as this, so long as FlyBritishAirways could get video online addressing the main concerns of news media, there would be a strong urge for the news media to use it. FlyBritishAirways would most likely have former broadcast journalists working for them, otherwise they'd bring one in.

The advantage is that Walsh doesn't have to suffer the unpredictable and relentless questioning from news media. Its a command and controlled environment.

As the videos stand at the moment, they have running through them the DNA of all corporate vidoes - jaunty corporate music intros that mark out PR akin to listening to a Chaplin ditties screaming, "This is Chaplin" or that controlled backdrop that looks too contrived. But that will change.

Simply because this YouTube audience is far more sophisticated in media than previous generations and will begin to discern and filter where the message is coming from.

Broadcast Media Control
The media itself has its own insurance policy, qualifying the origins of external media, though not as vigilant as they should otherwise you'd get APTV and Reuters plastered all over the screen. (this is a side argument as APTV and Reuters are impartial news outfits).

For the use of external videos, its not just good policy in attribution, but necessary for integrity of the host, but the media historians in you will know that attribution is only a relatively recent act.

It took an incident with GreenPeace where the BBC felt it had been compromised for the broadcaster to firstly put a ban on the use of video news releases, or heavily censor them showing where they came from.

The daddy of the video wars in the 90s was Brent Spar: Shell versus GreenPeace, which serves as lecture 101 for all PR firms understanding the dynamics of video news. I was invited to speak to a Fortune top 10 company recently who felt it was getting a raw deal from the media.

Video Undercurrents, an activist company also proved in the 90s if you've got exclusives, the broadcasters will eat out of your hands:

Well would ITN be interested"?
We phoned them up and the said, "No not really, shot on video, we could never use it".
So, we went down to ITN and said "we are here and we shot on Beta".
We had shot it on Hi-8 and the ITN man said,"I thought it was Beta", and we said "Oh well we made a mistake."
So he watched it and just could not believe it.....
..It was just something he had never seen before; everything up to then filmed from the ground upwards, but this was actually on it (the roof).
He used it and it went national
( taken from Lets do it - Campaigning video news magazine by Paul Oconnor 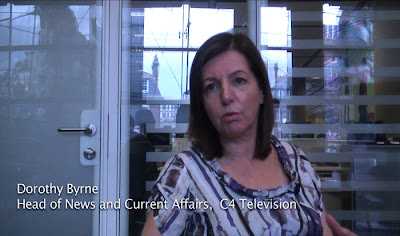 For the videojournalist or videojournalist firms of the future, they'll play a stronger hand not just in corporate head2head interviews, but turning over insider packages, but with the likely caveat of a less PR schtick, at least as we know it now. 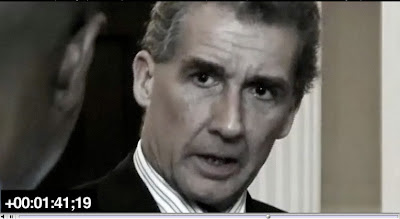 David interviews the then director of Chatham House
This interview I did with one of the UK's leading think tanks Chatham House is independent enough. I asked the questions and got no direction, but it's sufficiently robust and shows their former director engaging in issues, very frankly, to the point, that it explains what Chatham House is about. You can watch the video here.

Steve Punter, a veteran news editor and talented programme maker, makes the point more succinctly. Everyone now has their own media and the job of the expert will be in their craftsmanship of making watchable, intelligent, informative programmes.

That's the next rung for videojournalists perfecting their skills. It's not about the camera, and not about the technology, but the ability to understand the semiotics of video news and audiences.

In many ways then the relationship we have with this new video form will at some point be inverted. When the practitioners amongst us see videojournalism not as the low hanging fruit but a complex set of skills. That much the Guardian's former Head of Video Robert Freeman confirms.

And then all sorts of media, with your integrity intact, will be open for business. PR firms talk about changes to their industry, this is an area, the use of video, where there is still enormous growth to observe.
Posted by Dr David Dunkley Gyimah at 10:03 am