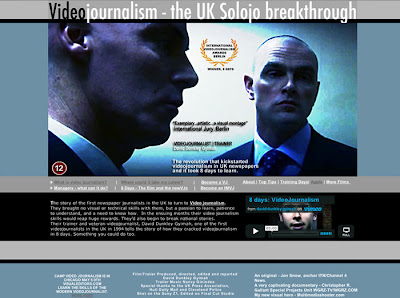 Front page of Videojournalism site for the UK's first regional newspaper videojournalists. The combination of VJ, site building and multimedia is what David refers to as Integrated Multimedia Video Journalism IMVJ.

I'm in Chicago soon to meet friends, talk and mix it up with practical and theoretical ideas 'bout Video journalism, and exchange views into the small of the night.

I'll be joining Angela Grant whom I've not met but know her work - great stuff - from News Videographer.com and Robb Montgomery from VisualEditors.com in what's been penned as CAMP VIDEOJOURNALISM.

It's something we dreamt up while in Cairo together

I'm hoping to see some of the different styles emerging and see if I can spot some Video journalism trends and trajectories.

There are a range of international VJs/ solo news film makers whose work I so admire: Washington Post's Travis Fox whose film about a bereaved 911 father who helps rebuild the pentagon is a constant source for my students year on year.

Last year one of them rang him up. He missed the call and duly rang her back. Top Bloke!

Then there are the VJ/ solo film makers I've had the privilege of meeting: Naka Nathaniel - awesome a truly nice guy to boot; Scott Rensberger who should frankly stop winning awards; Dutch Ruud Elmendorp - an award winning VJ based in East Africa, and Stephan Bachenheimer whom made Guantanamo Unplugged. Watch it!

Just as television has its cultural nuances and flows ( see Raymond Williams, the same could be said of video journalism. Though good stuff invariably travels well irrespective.

But as film makers what we do is learn, borrow and God forbid steal visual ideas from each other.

In my career one of the most invaluable pieces of advice was: Listen and Learn. ABC News' style is different from the BBC, which was not the same as defunct agency WTN, which is another kettle of fish to Channel 4 News, which looks to have nothing in common with Channel One TV - a VJ station.

I worked at all of these at some point.

But all provide recombinant DNA for something else, which could either work or be bloody messy.

However there is no prescriptive route to creativity and its execution. We learn assimilate and then take the stabilisers off and find a setting that enables us to replicate, but also surpass those around us.

Tutors teach students whom will likely, very quickly, streak past their tutors own knowledge in this speedy media scape. Experience is crucial, but we also need an injection of the zeitgeist - what's happening now. It also keeps us sprightly.

Traditional film and TV making skills are still crucial - absolutely. TV lets us know what video journalism can do, and multimedia news making when that becomes the norm will thumb its nose at video journalism. Hah!

We have endless debates online about video, video journalism, which are absolutely necessary; the end goal is about a product, so a major solution is to go do.

We'll succeed and fail and do it again and then succeed some more and then find our voice - and when we do that voice will be unique to its author.

After all we are painters with video and you wouldn't expect craftsmen and women to all paint the same.
Posted by Dr David Dunkley Gyimah at 11:07 am