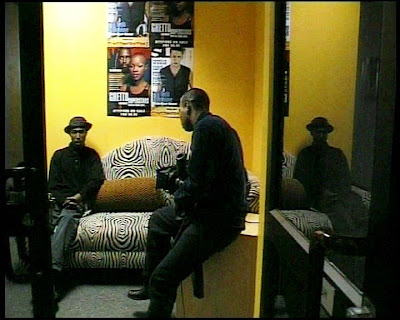 David shooting with the Digibeta 700

I was at lunch and I was asked the question. So what d you think about TV and TV making versus the VJ thing?

Here we go, I thought, and by the time I'd finished my questioner looked a little surprised.

"I think the them and us is a non argument in my book. It's really horses for courses.. Truth this is really such a well worn point that.. phrew!

I started off as journalist before learning how to use a camera - the Hi8 - whilst at BBC Reportage and then the beta 400 and digi beta- as part of video journalism.

I have been into cameras since I was a teenager and still have my Super 8mm, not the exact one. That got busted.

I was at a second hand shop and bought a replacement. Great camera, Schneider lens; the works. There's nothing more liberating than creating a film, and I suppose journalism was that release.

I enjoyed the reportage, but was always fascinated by what happened the other side. Anytime I was out with a crew I always carried the tripod (camera operators would never ever give you their camera) and ask lots of questions.

I'd follow articles in American Cinematographer, intrigued by how light and tone could create a mood.

And when I turned to producing at ITN's Channel 4 News, I discovered I could talk to each side of the production process in a language we all understood.

Hey Tim you got a female - female for the XLR jack. Yep I'm running bars. View finder looks fuzzy, dunno whether it's that or the back focus.

The same with editing: Could we L cut here please? Yep the tape's blacked. These were the days of the transition from linear to non linear , which at the time was never going to work. 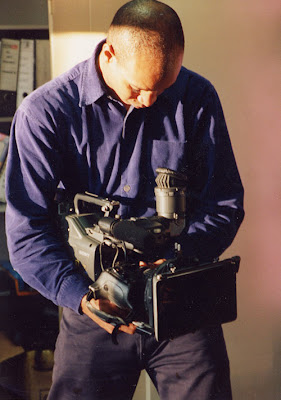 VJ ORIGINAL START UP
When we started out in the UK I can, now looking back, understand the resentment from some TV people. TV News had just made substantial changes to the work force.

The three/four person crew: Camera, sound, producer/fixer, journalist had turned into the Cameraman/woman and reporter. Camera operators discovered that their fees were being squeezed and that news desk preferred an all in one.

And you had to have your own camera and the better yours was the more you got called for gigs.

It's one reason why Camera men/women invest a lot in their gear, particularly lens, Matt boxes, filters and sound.

I don't think a proper debate ever happened about VJ and TV and there was unease and an amount of ridicule back then about the young upstarts.

When we started at Channel One, we were supposed to use hi-8s but the management got cold feet, thinking the industry would not take us seriously if we turned up with smallish cameras, and even after the betas, they went for the DSR200s.

I did have some choice moments interviewing MPs on a small Hi8 and found on a feature shoot on the Island of Falaraki in Greece, which was rampant with young Brits and publicity shy Greeks, the Hi 8 came in handy. Remember this is 1995.

But I have an important mantra, let the pros do what they do best. I might VJ, but if there's a camera person on the shoot, a friend etc, whom I could work with I'd beg to have them on board.

No secret also, kerzillions of camera operators may work the news route by day, but away from the office are busy doing their own shoots, directing, producing short and dockies.

So in effect as someone like Scott Rensberger will tell you, and we had a good chat about this in Bilbao last year, ain't much difference between the camera - Director - producer and the VJ.


THE BIG DIFFERENCE
Aha, wait..! Claudio Von Planta, one of the most experienced camera operators in the UK sums it up.

In 2000 he had the whole works, several cameras in which the lens alone could buy a house, then he changed over to smaller lighter the A1, which he uses to shoot for CNN international and the rest.

He's a canny lighting camera so knows how to use light. By the way, he doesn't call himself a Video journalist, and more often than not working in TV I didn't either.

He's fast on the draw, inconspicuous with his camera, likes to go get in tight,and catch his subject when they've figured the cameras stopped rolling.

A set shot in Congo with a former militia had the subject talking in the third person about atrocities that had been committed.

But on the journey back to town in car, the subject started to confess his involvement. Claudio says he whipped out his camera very swiftly and in cramped conditions resumed filming, which they used in the final cut. Very Compelling stuff!

If you google Claudio you'll find out about his pedigree - from shooting in Borneo with special forces to climbing the Himalayas etc.

The more common argument with Vjism is how it can be used to mimic the newspaper beat. In other words VJs see themselves as scooping up news items before TV gets onto it.

That in effect has nothing to do with camera work and individual production techniques, but the paradigm of how newspapers and TV News works.


PD VERSUS VJ
The call from the BBC yesterday to ask whether I was interested in an international shoot is indicative of the PD understanding - Producer/Director shooter.

Video journalism has connotations that, yes have changed over the years, but still often attract the wrong sort of publicity.

TV news has rules for reasons that Hollywood Cinema has, unless that is you're making an art movie or are an independent. We're going into auteur here. Actually far less basic.

From the Evil Deads to Once, low budget and DV film makers have often experimented with form, and then Hollywood has caught wind and reigned the directors in to become part of the fold. There's a great read about Mirimax's history.


On some shoots, I've occasionally attracted comments that "hey that looks like TV", and I say yes, because I don't believe in throwing away the baby and the bath water (I have always thought what a crude analogy that is.. who dreams up this things.) And TV's bags of tricks do offer get out clauses.

Whatever we might say about VJ its a derivative of TV. It was born from TV, but then aping what's good about newish media, has broken away to invent its own rules.


TV BEFORE DIGITAL AND AFTER DIGITAL
Understanding first shift and second shift aesthetics in TV - New Media lets me appreciate both. One we know about all too well, the other is experiential.

One has a cost element and emphasis on lens clarity that it's appreciation would be lost on everyday turnaround newspapers online, who've now come to inherit Video journalism.

One allows me to be more discreet, the other tells you I'm a cameraman/director. I often tell them I'm also the reporter, but when I am using a digi or beta, rarely do stand ups.

The them and us is merely in my mind the old fight of a division of labour: history is littered with them. One of the best, newspapers saying TV wouldn't last and then having to change their game to include more analysis news and commentary.

I imagine a few old editors having a chuckle now at the direction their papers are taking, but somewhere there's a middle ground (huge) where we'll all meet, and then of course some will always be on he fringes: it's the "bell curve" of life.

The VJ - small size jack of all - works mainly because of cost and the medium, online. Truth, that's been the life line of Vjism, broadband!

Like I said Vj lets us know what TV would have liked to continue doing which is to innovate in visual terms, in the same way independent cinema has done.

And whether it's the term we feel queezy by, it's really about creating films, not as a maniacal practitioner, but as someone who's passionate about storytelling and would like to have more input into realising their ideas. There!
Posted by Dr David Dunkley Gyimah at 8:42 am