The tao of videojournalism - 10 common banana skins from newspaper 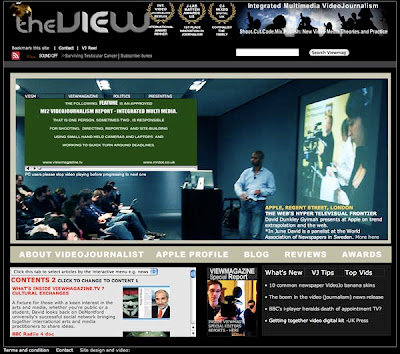 When it first burst on the scene with hi-8 cameras, Video journalism had TV in its cross fire.

TV News was clunky, and worse followed a set formulae. This new upstart would correct that. It would allow for images that were up, close and personal; the kind you could do without mounted camera.

You try filming the equivalent of the Tour De France, whilst holding a beta cam versus a small hand held. You get my point.

The visual language also begged a new literary language. That was the idea.

The new event horizon of video journalism which many newspapers occupy looks to the bedrock of TV style shooting as its template.

And why not, except that is if you see Video journalism as a form for the auter. Mix it up.

Since the VJ boom, I have had the pleasure of training hundreds of journos from a multiplicity of outfits.

But looking out across the prairie - there are some common banana skins worth noting - so here are my top ten.

1. Unless you're shooting docs and are adept at observational-based features there are many occasions when you'll need a narrative. Probably the most difficult of forms, particularly with short packages is weaving SOTs/interviews in and out of each other.

2. You need a narrative to nail the exposition or what the BBC referred to under its 90s Director General John Birt, "Birt's mission to explain", where you provide background context to the report.

3. Videojournalism is as close to video agency-based story telling as anything else. Video agencies sell pictures so should you.

4. That means script to picture rather than the easier picture to script. You'll get a more superior product.

5. Interview in situ. You don't always need the set up - rule of thirds interview.

6. Learn to pace the story . All stories have an inbuilt metronome. It can be languid or pacey. You can affect its pace in the edit, but try and feel the pulse. Here's an exercise: see if you can read the visual speed within the first 30 seconds of the next movie you go to.

7. Write the spoken word, not the literary one. That often means halving your word count and working to active sentences with few parenthesis.

8. The voice is an instrument and can telegraph emotion and meaning. Learn how to use it. Some broadcasters often start their careers mimicking a favourite before their voice comes into its own.

9. Learn to break the rules that are there to help you on your way to shooting video. Remember they're just guidelines: rule of third, crossing the line. Watch Bourne for a master class in breaking all the rules.

10. If you're shooting to TV's stanza, you run the risk of making your vids stale after a while. Mix it up, experiment. More to the point watch what other people are doing, not as a spectator but a technician.

David Dunkley Gyimah will be speaking at the World Association of Newspaper Forum in Sweden on Digital media training for the new newsroom.

Four hundred editors from all over the globe came to the 14th World Editors Forum in Cape Town in June 2007, the largest meeting of its kind anywhere. We hope that an even greater number will join us in Göteborg, Sweden, in 2008.
Posted by Dr David Dunkley Gyimah at 10:29 am