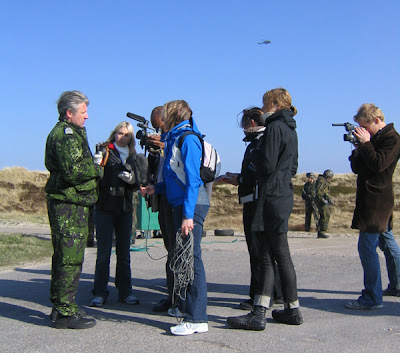 Two thoughts occupying my mind for a seminar with Egyptian journalists surround the use of video journalism and emergent reporting. The corollary of my trawl may expand past a two line mention in previous posts.

Swarming is a seemingly amorphous, but deliberately structured, coordinated, strategic way to perform military strikes from all directions. It employs a sustainable pulsing of force and/or fire that is directed from both close-in and stand-off positions. It will work best--perhaps it will only work--if it is designed mainly around the deployment of myriad, small, dispersed, networked maneuver units. This calls for an organizational redesign--involving the creation of platoon-like pods joined in company-like clusters--that would keep but retool the most basic military unit structures

Some of the best laid plans for injecting fresh ideas into an environment have often come from the military on the one hand e.g. Art of War by SunTzu and or experienced practitioners in their field and strategists within boardrooms. That old adage, If you want to know about water, don't ask a fish applies.

360 reporting is one term which sits on the edge of adman tag and something approaching a more rounded delineation of the facts on a story.

The press take a direction on the story. It's boxed and packaged for you under the tenants of journalism's objectivity and impartiality at best. But there are inherent difficulties in assigning complex multistrand stories for reporters; time and closeness towards a particular bent of the story.

Vjs much like newspapers working cooperatively could unravel the story in so many ways, at least to examine the two poles of what is often refered to as the "two legged story" government versus pressure group etc.

In 8 days, a film I made about Videojournalists pitting themselves againt detectives to get to the story, swarming would have helped in scrutinising both sides in real time.

It begs the question which in turn erodes the thinking that Vjism is in fact cheaper media on the make. For if anything in a robust media economy, it should not be uncommon to examine different aspects in more detail thus deploying swarms of VJs. Financially it sounds like suicide, but those economies can be ironed out.

We'll see versions of this at play in existing media during the hustings; and general elections of politics. Reports from different camps forced on broadcasters by election law. But if swarming were to have a bigger impact in video journalism then it should be deployed a lot more on stories with shades of black and white.

My best use to date: Denmark, an evacuation order is in process for refugees in Nato's make shift combative war. On a long pathway heading to a checkpoint and waiting helicopters at least three stories are evident - all part of a bugger issue.

1. the fleeing refugees
2. The army commander controlling the order
3. the treatment of evacuees at the checkpoint. There were no women soldiers to pat down female evacuees
4. And a car involved in an accident which has invited the attention of Spanish Special Forces.

The reporters and Vjs peeled off.

In situ I could assign a VJ/reporter to two strands 1+3, and 4, whilst another reporter took up three and the mop up exercise.
But each team had the awareness also to pick up on strands their reporting colleagues may not have been privy to. The result a richer diverse stream from the story.

Now I'm not proposing this is the ultimate use of vjism, neither am I suggesting it a panacea for reportage where the story has no legs, but that it is an option.
Posted by Dr David Dunkley Gyimah at 5:14 pm