It's the perennial saying; you've even uttered it yourself when signing up for a video course: "Is it practical, because I don't need theory".

Thus you'll get told how to shoot, hold the camera, and perhaps touch the margins of theory, which masquerade as practise, with "don't cross the 180 degree line", or "you need to keep to the rule of thirds".

The result is the deliverance of uncritical statements of what you can and cannot do. Thus when you pick up a text book, you're met with the banal, sometimes odd aphorisms: "Don't shoot into light, if you want your film to have some bite".

Learning the practicalities of anything has to be foregrounded in theory, and vice versa. Often then the point is not what you don't want, but how much should be given. 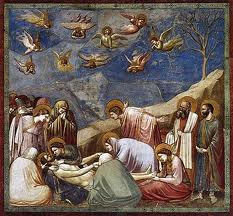 The rule of third is the dynamics of compositional space, which unhinges artistry from symmetry and the boredom of centralisation.

It may have been written down as a rule in the 1700s, but had a long lineage before then.

You can trace it back to paintings by Giotto and his 1305 piece on the "Lamentation of Christ".

And Giotto is an interesting figure because he is purported to be the artists to translate flat figures in paintings into 3 dimensionals. He introduced perspective to paintings.

If you look carefully at the picture you can just about make out the dualism between a picture struggling to show perspective, but not quite achieving it entirely.

But rule of thirds has another significant attribute. It is a Western style and you can break it as much as you want, it depends on your intentions. If you search through early films, and film noir, the main character is often central. While in Chongqing last year I had fabulous time observing multiple perspective art.

These two shots below come from one of the masters of film making Yasujiro Ozu in his 1949 film "Happiness comes only through effort".

What do you see? 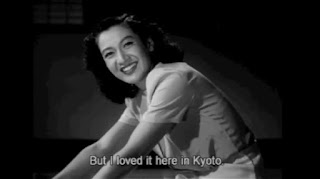 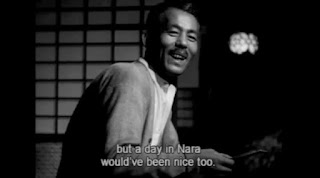 Styles and language do change, but the point is not adhering to the rule of thirds does not make this composition any less dynamic.

Invariably, it is the practitioners who produce a body of work, and unable to translate themselves; they're too busy working, give way to theorists to chart interesting finds. Andre Bazin, was one such important figure. He and his colleagues feasted on American films and contrasting then with European ones, particular silent films, could make various claims.

But another important point here is theories which build up to philosophies are not fixed either. But its important we have such debates, so we can capture new ideas, and package them for others.

Practiced-based videojournalism and work
The trouble is now, we're in a flux - an assault of technology and communicative devices - that either everyone is a theorists or we're not getting to the bottom of those important moments that need rationalisation.

The everybody is a theorist is best observed in lectures and public meetings. A point or opinion is presented as a findings. We can all criticise a film.  "I didn't like it because....." but few of us are skilled at a critique that finds issues, providing theory-based answers.

A ball falls to earth not because it wants to but because of the theories of gravity.

Answers can sometimes be explicit, and implicit and the creative arts unlike their science-based siblings depend on methods that are outside the experience of data collection. What is often called positivism.

So, whilst in maths 2+2=4, in the arts the sum of two bits can be bigger than the whole, as other factiors come into play e.g. personal experience etc.

Practised-based work supplemented by rigorous theory is important for enabling us to deconstruct something and know why it works, not that it works.

Videojournalism, often and its not exclusive, finds itself in this conundrum. Ask anyone what it is and what it's like and you'll get an answer, then ask how do you know?

Such an interrogation of a form is not to be clever, but to try and understand and build upon existing language. Because here's the bottom line. Film making which covers many forms is language-like; language evolves to help provide meaning to complex issues, and the new syntaxes and grammar we learn, if indeed they are new, help us shape new ideas, because without ideas, where would we all be.


David Dunkley Gyimah publishes viewmagazine.tv, is a senior lecturer at the University of Westminster and artist in residence at the Southbank Centre, London. He is completing a five year study which includes icognitivism and film making of the future.


Posted by Dr David Dunkley Gyimah at 9:41 am