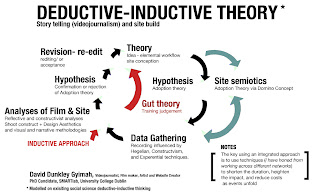 Anyone involved in research, particularly Masters and Doctorate will recognise a deductive-inductive methodology illustration.  Methodology is one of those scary words for non-academics and is often confused with method and has core values in videojournalism.

Simply a methodology is a workflow consisting of many methods of doing something, Remember Apollo 13 the film, when they're trying from ground control to get the disabled space crew back to earth and there's nothing in the manual.

They make up a methodology, which consist of sub routines of various methods, turning things off in sequence and trying until they get the right amps to get them safely back home.

However, the world of philosophical thinking seeks to contain methodologies broadly under scientific or non-scientific (social science) routes and each yields different pathways. Understanding this allows you to devise a methodology realising its strengths and weakness ( all methodologies have flaws)

I have changed some things in the above illustration to reflect the practice of IM Videojournalism, which is the making for a film and the site build combined, which bleeds into the contested cinema-journalism.

Each sector involves further branches and there are some things, such as Literature Review, or in film terms an artistic-content review, that you can't cut corners over.

For instance, the idea of providing a POV of a horse racing, which a number of modern videojournalists might have executed, was first performed by Abel Gance in the early 1900s.

Similarly narrow, or short depths of field as it has previously been referred to is evident in early Japanese films around the mid 20th century.

A good work-flow is one that can withstand various tests. If you've worked for a media organisation e.g. the BBC, ITN, ABC and WTN TV, Channel One TV, several independents in journalism, design, advertising and the web, as I have each possesses a unique workflow to accomplish a task.


Now if you combine that with say my background working for BBC Radio, domestic and International, they too possess defined workflows. Now what if you could take from that and build your own methodology for a new constituent.

Effectively you become a walking library cataloging tried and tested methods that can be passed on, which facilitates, if you're that way inclined, creative thinking.

Creating thinking also has methodologies, which my PhD colleague Alison is researching which defines how and the best places to come up with those innocent excited finds.

For example why do companies place the water hole, or should, away from the desk configuration, because the act of walking, specifically movement creates liminal thinking. How many times have you left your desk for the cooler only to rush back saying "aha got it".

Take this interview I conducted as videojournalist a decade ago. I return to it, because the interview unveils a methodology to interviewing executives, which I use in training programmes and my Artist in Residence programme. You can see the interview on Viewmagazine.tv

Depending on the reception of the interviewee when we first meet; here its more about visual clues, I can determine how long I have and how what I want from the interview can be richer.

Here's a simple method I used in this case, I asked questions that reversed the chronology on events.

Incidentally the technique is widely used to catch criminals who are telling lies and good talk show hosts. Try it next on a friend. Let them invent a lie and attempt to unravel it.

Exploding myths through experiential learning
Take this simple observation of the double-headed presenter in news, pioneered by US TV, which is now a staple of TV across the world. But why two?  In the UK, the solo presenter reigned in the 60s until that is the nature of newscasts became complicated.

There were so many things that could go wrong, the idea of having another hand nearby, who was presenter material, but could sort out glitches before the next item, drove ITN to have another presenter. These are the words of Geoffrey Cox, one of ITN's most illustrious editors. How did I know that?
And going back to Apollo 13, the fact that the third earth-bound astronaut was so experienced, helped him to become creative to devise a new methodology to save his friends and crew.

One of the main planks in turning around practice into theory into practice and sometimes vice versa are added constraints I place on the process.
Anyone who has shot on 16 mm film on one spool of film and worked for a major organisation will spot 2) and 3). 100 ft, a mag, works out at about 3 minutes of film time, which many news people were taught to shoot in or were shown the door.

As  a film maker first and now a researcher, I have been able to rework and adapt various methods for clients and corporates I work for.

I'll explain more of this over the next few weeks. This week I'm off to Dublin to meet with my PhD cohorts at the SMARTlab on campus at University College Dublin. Here's the Dean of the school explaining SMARTlab and this link goes to my page on SMARTlab talking about the experience

p.s btw, I'm using a specific technique, which should be invisible in writing this post  - a method that feeds into the total sum of site buidling.
Posted by Dr David Dunkley Gyimah at 9:32 am