One day in the Masters in Journalism Online module and student teams are now counting the seconds to go live.


Three teams of eight have been "death marching" to hit the publishing deadline after 6 weeks studying how to build and comprehend online communications. It's not over yet too.

The term "death march" has its contemporary roots in software development but came to prominence  in the late 1990s whilst working for a number of dotcoms. The verge of web 2.0 and funding to launch meant no one slept.

It's a death march because you go with little sleep or food over a fixed period to get the job done. Edward Youdon's Death March  is worth a read.

So far the present crop of Masters cohorts have taken in CSS, XHTML, Flash, Pshop and of their own volition Jquery and Java Script and more. That's the software bits, but there are development formalities that arise evaluated within  a real-time workflow. 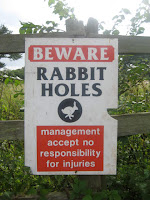 The module is given the alternative name, "the rabbit hole" for a number of reasons related to Alice In Wonderland: night and day blur with an array of madhatter problems and solutions thrown the students' way.

The default is to test cohorts to unconsciously make mistakes and deconstruct afterwards thus making less mistakes thereon. The value of making mistakes is a symptom of creativity, and thus should be welcomed, particularly in the hypemedia landscape - where no semiotic is fixed.

From design, brief, team management, workflow, creativity, and server technical support - if its part of the real-world it goes under the microscope.

To say online is not for the meek is putting it mildly as the course is designed to not only test new skills, but behaviour and group dynamics  - often employing the wisdom of crowds.

The new journalist
This coupled with the documentary module, which uses one aspect of my videojournalism praxis provides a thorough grounding in creating a new modality of journalist.

If docs is about affectivity, then hypermedia, where we are now, is about delineating the nature and notions of how to deploy affectivity.  That is how and what do you do to alter the state of something to become more tangible.

Similarly, the move forward in online is about interrogating classical and contemporary spaces and their role in a post-post structural society.

Post structural here refers to dissociative position given to deconstructing language. The world we now inhabit can no longer be interpreted by an exclusive fixation on semiotics or psychoanalysis but more fluid visual methodologies.

For instances in News you're told you can't do a jump cut ( classical); but you can in post structural because the language now is meshed - a disruption accelerated by Youtube et al

Industry giants
So what better way to rattle the cage of journalism and communications further than to bring in two industry giants thus far and a third and fourth looming.

Firstly one of the Guardian newspaper's top 100 influential media people Ilicco Elia, who came in on a lecture and roughed up ( in a very nice way) the students and their work.

The way Ilicco works is so naturally unnatural. Within a minute he had the students at ease critiquing their work with comments such as: "I really like that", and "your information architecture is the pointing the wrong away from your work".

Ilicco's passion as one of the UK's leading mobile technologists, knitting content and audiences, is pushing mobile content. No surprise then when he emptied his bag. This is what fell out: 7 mobile phones, not counting his Ipad, pc etc.

His lecture on a Reuter's mobile capabilities and how audiences  benefit from real-time transmission of pics (during the World Cup, the system he helped develop meant he received a photo of an England goal within 15 seconds) underlines his philosophy of
distribution.

Incidentally if anyone from Canon, Sony et al are reading this, I agree with Ilicco's thinking that it's high time pro cameras were fitted with wireless relaying devices to push pictures to consumers.

Later in the afternoon the founder of one of the world's leading multimedia agency's MediaStorm's Brian Storm, skyped into lectures giving students around an hour of Q and A.  Questions ranged from his unique methodology, his background, how he started and how interns could join his outfit.

I want to pull out one story he told that illustrates a candidness and doggedness exemplifying a schema everyone should adopt. Conversely this story also highlights what goes on beneath his highly finished products - a rare insight behind the scenes.

The story relates to abortion of female sexes in areas of India. An intern with local knowledge and the appropriate sex ( something that may not figure in the editorial meeting in Western societies) was instrumental in securing interviews.

The production then wove Walter Astrada's (photographer) narrative and that of the story itself into a seamless production. It was in the post where things got interesting.  Brian said they had to rework the female-voiced narratives a couple of times, with user experience feedback before it truly gelled.

Brian mentioned they have a number of projects in the works, not least their publication, and various workshops where the MediaStorm brand has fast become a working methodology.

You can find an interview with Brian which I conducted in Miami, where we first met and a feature on Ilicco hosting a mobile phone gathering of experts at Reuter's London HQ here.

Meanwhile here are some some shots from the lecture and online newsroom caught by Masters student Valeria  - an accomplished photographer in her own right.


To find out more about the sites being launched go here: 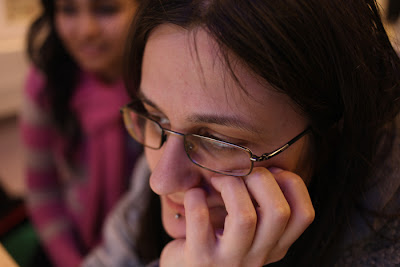 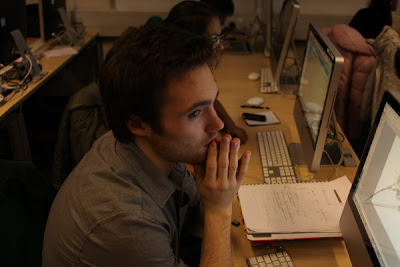 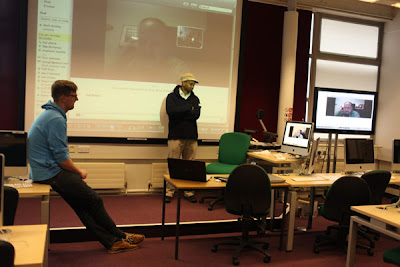 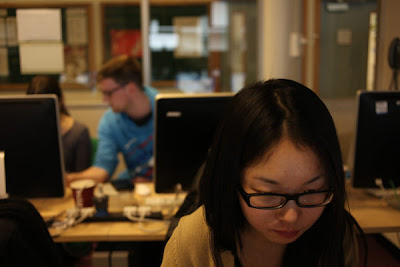