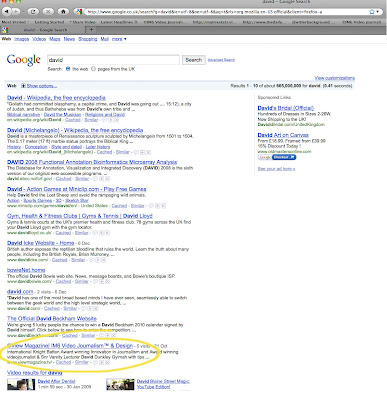 The email entitled: "Your google Fame - David Dunkley Gyimah" surprised me as much as it had a friend.

Did you know if you google "David" you come up this. Jammy how did you do that?".

Truth I did nothing, but I had to take a look. After all who wouldn't. It wasn't as if Nigel had googled "david dunkley gyimah", just "David",

And there it was, for a fleeting google time span below "David Beckam", "David Lloyd", and "David Dunkley Gyimah, viewmagazine.tv" in a sea of 664,000,000

Back to reality, I'm hardly known in my own school. I admit I have shaken Nelson Mandela's hand once and stood next to Jay-z thinking what should I ask him?

But no there's nothing I do that remotely goes anywhere near what that lot do, which is why if, you're now testing out that link, you'll see nothing.

There, I have disappeared again.

If you're not on Google, you won't be read

Zach Leonard, Digital Media Publisher of the Times writing for WAN's yearly media guide says journalists need to know how to write SEO friendly copy. Between 30%- 60% of the Times' traffic comes from SEOs, he adds.

If google can't read your story, no one else will he concludes, which means for my fleeting ranking, I could have been read, that is if you were looking for "David".

What does this all mean, apart from a whiff of vainglorious exposure? I'm reminded watching Kevin Bacon on a late night show saying he googled himself to see the Kevin Bacon game that is six degrees of separation.

Not a chance here, but there is some academic bent to this, which I spoke about at a presentation last week for which that's all I can say because I NDAed.

The point is a creeping change to journalism courtesy of SEO, which stands to commit those to adopt spider-friendly vernacular.

Google - what would it do?

Google's tightly guarded "Mama's sauce" which gives you a presence in its rankings, is predicated on a number of things.

Broadly the idea of referencing, just like an academic article with its bibliography is key, as is its streamlined, perhaps even accelerated form of writing which until recently was some wierd alchemy.

But the English language has never stood still. From the realms of hear ye, hear ye ( articles I have been looking at from 17th Century Journalism.

Then there's Addison and Steele's equitone, to a refined form in the late 1880s of a third person voice and the various narrative styles spawning any number of literary genres.

The difference this time is it's cyber. You needn't know how to spell ( yeah look at me) produce good grammar, or write a coherent sentence, so long at you know the shwei.

This is not entirely right, but it does raise issues of primacy across search engines and the extent of SEO. If you googled the White House in the 1990s you'll know what I mean. Will Bings algorithims set different standards? And what about the next engine after Wolfgang Alpha?

Who knows, other than the fact I'm intrigued and am hedging by bets that it won't be long until we'll be seeing the emergence of a brand of Super SEO journalists trampling the big establishments with news copy and their mega audience.