Video journalism combines the skills of radio, motion graphics, cinema, TV and online, so what's next? 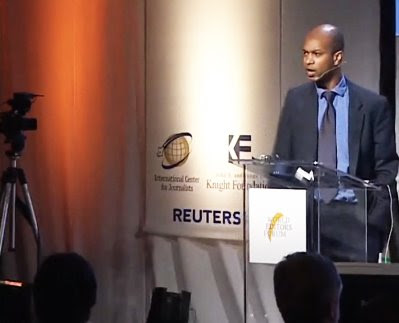 If you could combine the skill of radio, the art of motion graphics, the eye of photography, the mis en scene and arcing of cinema with the compositional language of television, newspapers and blogs provocativeness, and behaviour of online, I believe we'd be closer to understanding Video Journalism.

The powerpoint for my talk goes up on WAN in the next week and hopefully it's self explanatory.

Sadly I couldn't expand on some of the underlying emerging issues, which may have had some interest.

Principally how video journalism and the language of video is under going it's own reforms.

The parallels are not far off from the changes to the written article world in the 1700s, when publishers Addison and Steele's equitone prose opened up the word to a voracious and brand new audience.

And yes there were other factors that played into their hands, but their style contributed enormously to their own success.

If you were to launch a television station today, then video journalism suffice nicely

There was an initial argument, which still holds about video journalism's intimacy and as such the depth to which semiotically a report could go.

During the floods in Hull in 2007 that blighted huge communities, broadcasters were out capturing carnage and sufferings, but few were able to provide a tier of reportage which meant documenting a more intimate aspect by staying over with any of the families.

In part it was cost and logistics related. Also those huge beta cams aren't the most suitable cameras for closed confined, high risk-assessed spaces.

A videojournalist could have provided something very different, in the same way a photojournalist released from their studio plate camera provides a level of intimacy firstly in where they can place the camera, and secondly, how they compose the picture.

For the VJ, all this while writing the article, thinking up the narrative to the appropriate bed of these pictures.

However, the Net really does change everything.

As a film maker or lover, you'll recognise the enormous range of film styles that exist, and so these too are available to video makers.

We've really just started to dabble with video and its potential, so for the moment a point-and-shoot approach may just do.

But there's no getting away from the audience and their level of sophistication, not necessarily geared to high brow stuff though that's also the case, but in distinguishing between new styles, story forms and languages.

In film it could be styles of the 1920s - French Cinema - Von Trier's Dogme and then the more agitated film making of late in 24, Bourne, The Shield, where singular narratives entwine with multiple ones and the camera exposes multiple points of view.

All in all this is an over simplification, but the overall point is video journalism goes way beyond point and shoot and also the structural form of television journalism.

I'm not by any stretch of the imagination claiming its better; it's just different and well suited for contemporary media story telling
Posted by Dr David Dunkley Gyimah at 1:07 am