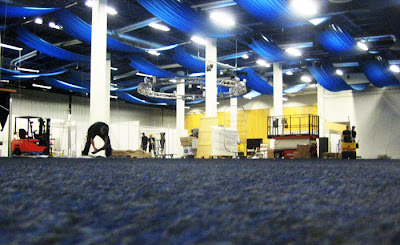 Strewn debris across the matted carpet floor, the whirls of automated buggies, driven by men in black T-shirts mechanically de-WANnig the conference hall.

A forlorn look wraps itself around my face.

The badge hung imperviously around my neck, which 24 hours earlier provided me "access all" to any part of the Goteborg Convention centre is as useful as my bus pass.

Actually my bus pass gives me a place of origin; my badge just says my name.

I'd wanted to catch the video team, swap some files, view their last films, but their room has also be sanitised.

So I found a temporary spot to park my bags and tripod.

Bertrand, the main organiser of WAN's gathering, had nodded to the idea of me bringing all my video journalism kit.

It's still fairly compact, enough for an 8 year old to take to school without social services visiting the parents on account of child abuse, but saddled with a suitcase, and various other bits you pick up from conferences, I'm beginning to think "yep I should have"...

Pity the poor souls, hahaha Illicco and crew from Reuters who have to be up for 4 O'clock, I thought yesterday as we saw off the last moments of WAN's gala with some impressionist band doing a "Kool and the Gang" number.

Well the last laughs on me.

They might have sleep walked to the airport, but they'd have shared the camaraderie of each other to swell their spirits.

At this time of the year, it gets dark around 11ish and first light breaks around 4.am.

But here sitting like a stray in the hotel any semblance of a communion has completely disappeared.

Even the WAN2008 wifi connection I'm posting this on, can barely stay alive, ebbing between one bar and two.

I might even be considered a bandit surfer at this time.

And with no magnificent buffet in store; fish, fish, fish, which many delegates prized alongside the beef, duck and veal, I'm smacking my lips as I pass a red juicy apple in front of reception.

It's gone. One less in a fruit bowl: there's my lunch.

By now having fashioned this post on the fly as one does, Jodie, WAN's supreme organiser passes me by.

She's made up for the 14 hour days from the last week, I'm presuming as she shares with me how she relished the lie-in.

Bertrand I learn is on a newspaper visit, but may be back for lunch.

We both muse whether we should gate crash: Betrand does good lunches.

But by now, a few minutes of seeing a familiar face on what is tantamount to a deserted island, Jodie's off again.

One last errand, to hand in the local mobile phones.

Even she now has to ask for assistance from a receptionist, whom quizzes her about what conference she, jodie, is referring to.

"One, two, two, two..." a mic check to my left is perhaps a sign that I ought to bite the bullet and head off elsewhere.

Another convention, seemingly as far removed from the alpha pairings that gathered here in the last five days.

Oh Where would I go ?

Why the airport of course.

Not enough time to go wandering around town, yet a bit too much time to be sitting in those coma-inducing airport lounges.

My flight's at 4O'clock.

Ah well, it was good while it lasted.

Back to marking masters papers tomorrow.

Mind you, my shared office won't do much to dim the memories of WAN.

How did I start this post..."Strewn debris across the matted carpet floor".

The fall out of conferences invariably means you've stored up work awaiting you.

And that is a very forlorn thought.

p.s Ah my battery life has run out and there's my cab
Posted by Dr David Dunkley Gyimah at 10:29 am