Future of Video : What makes 12 years a Slave an exemplary film to learn from


It is as hauntingly immersive in its compositional scenes, as it is perversely in the more difficult acts e.g. Patsy's beating.

In its viewing, you'll likely lose yourself in its thickened oil work, unfolding a simple-to-follow plot, which is equalled by a visual poetry. 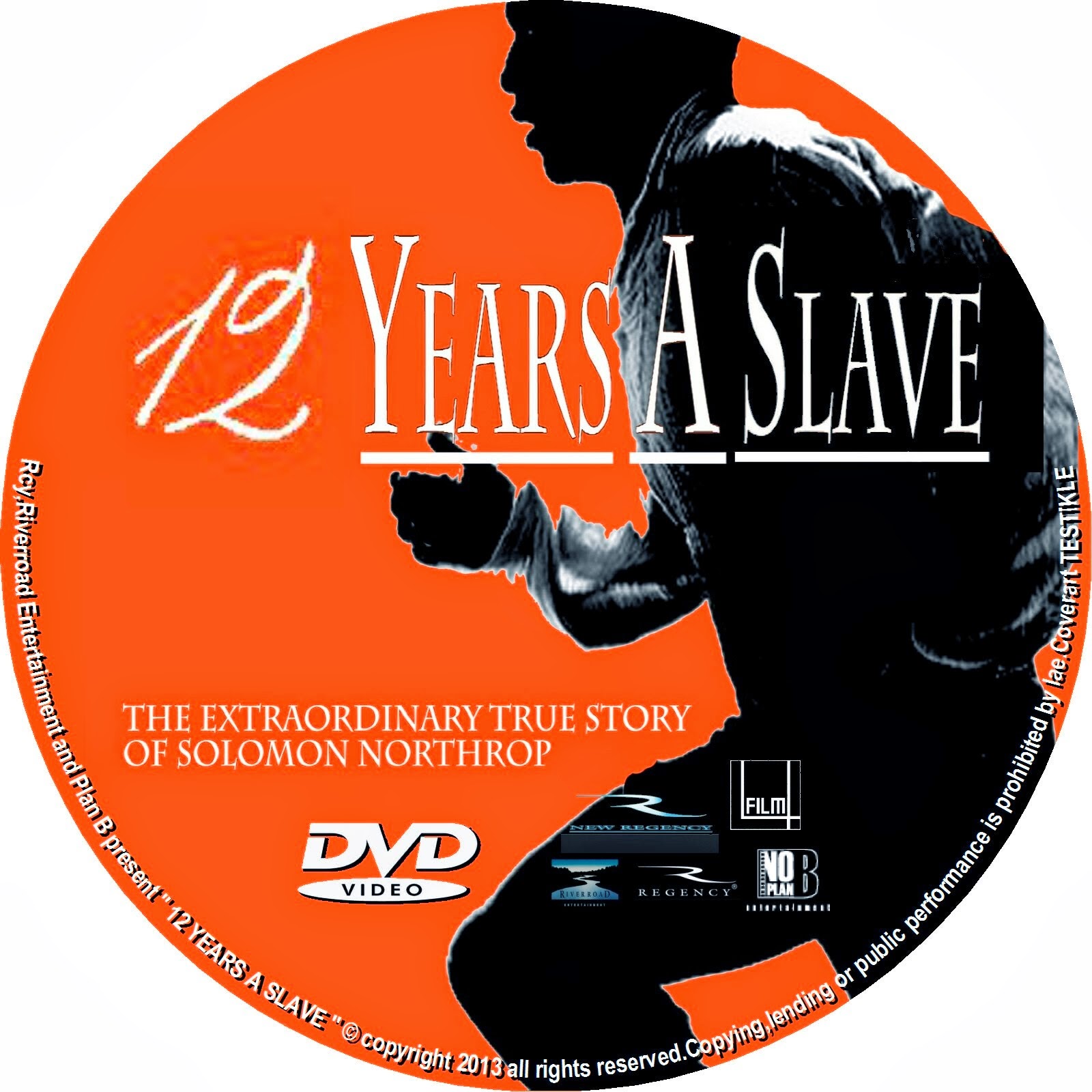 Even in the darkest moments; the near hanging to death of Solomon, the director finds art to play out the scene.

What is evident about 12 Years a Slave, is it is an artist's film. It inhabits a world of theatrical framings; how movies were once made, enveloping hues, colours that manifest as a moving image painting.

If video could truly hail itself as the successor - a direct comparison to canvas oil painting, and what the likes of Caravaggio, or Rembrandt would have conceived - this is it.

Recently released on DVD, I had the opportunity to watch 12 Years a Slave away from the frenzy which rightly carried the film during its Oscar run. This time around I could analyse the film's nuances.

This is reportage; the closest how I would define videojournalism-as-cinema  (my PhD thesis) as a proxy to what Steve McQueen, a moving image painter achieves.

No, I am not and would not dare compare myself to McQueen. What I am saying is 12 Years a Slave features a plenitude of styles that ironically, cyclically, define modern factual filmmaking e.g. news. In my work I identify this as a form of videojournalism cinema predicated on art.

Journalism critiquing can often be discursive, with the writer offering opinions, albeit professional, to evaluate a film. Academic critique, as undertaken by the film scholar David Bordwell (a theme he himself addresses) tends to be more explicatory and evidence-laden.

It's Bordwell's approach, which I'll try and use to delineate the film, coupled with my own sensibilities as an artist; an artist-in-residence at the Southbank Centre, with my primary focus situated in news and factual programme making.

1. Camera
Framing
McQueen's style is to shoot square on as if directing for the theatre. It is reminiscent of Swedish director Ingmar Bergman e.g. The Seventh Seal.

Like Bergman the camera is still, and there are few privileged positional cuts. McQueen's trope is his compositional weighting, so that a character dominant in the foreground is balanced by an event in the background usually in the 3rd  of the frame (see below).

The deep focus (as opposed to the penchant for shallow-depth-of field) invites the viewer to decode the screen - just like a painting. It's the closest to 'objective filmmaking' (read Cesare Zavattini).

There are a number of reasons why the film could be labelled unconventional in its visual framing. In fact it's an Art movie, or to classify it correctly based on its cues, this is an artist's film.

Take this framing. Very few directors would have the courage to frame this and leave it in the edit. The image is truncated leaving nominal film frame data off screen.

Perhaps, this is one of the most extraordinary shots in the film. This whole sequence where Solomon faces near death by hanging lasts two minutes, but this one scene lasts almost one minute with no cut, no camera movement. The movement occurs in the scene. The camera's stillness is countered by McQueen's play in the empty third sector of the frame.

If you're familiar with Bela Tarr's Werkmeister Harmonies, then you'll see similarities in durational cuts and how they induce reflective thinking.


These are not new concepts; French film scholar Andre Bazin stressed the importance of long takes towards film realism in the 1950s. What's remarkable is because the average film cut today is 3 seconds that McQueen can work against the grain, could be conceived as bold.

Further evidence of Arts influence is strewn across the film. The lighting and composition e.g. Chiaroscuro which Wiki states is


in art is the use of strong contrasts between light and dark, usually bold contrasts affecting a whole composition. It is also a technical term used by artists and art historians for the use of contrasts of light to achieve a sense of volume in modelling three-dimensional objects and figures.[1] Similar effects in cinema and photography also are called chiaroscuro.


This scene from Bergman's Winter light captures the art of Chiaroscuro.

This shot here from Kubrik Barry Lyndon is influenced by Caravaggio. 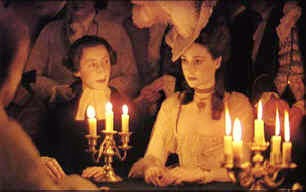 This is Caravaggio's Supper at Emmaus (1601) 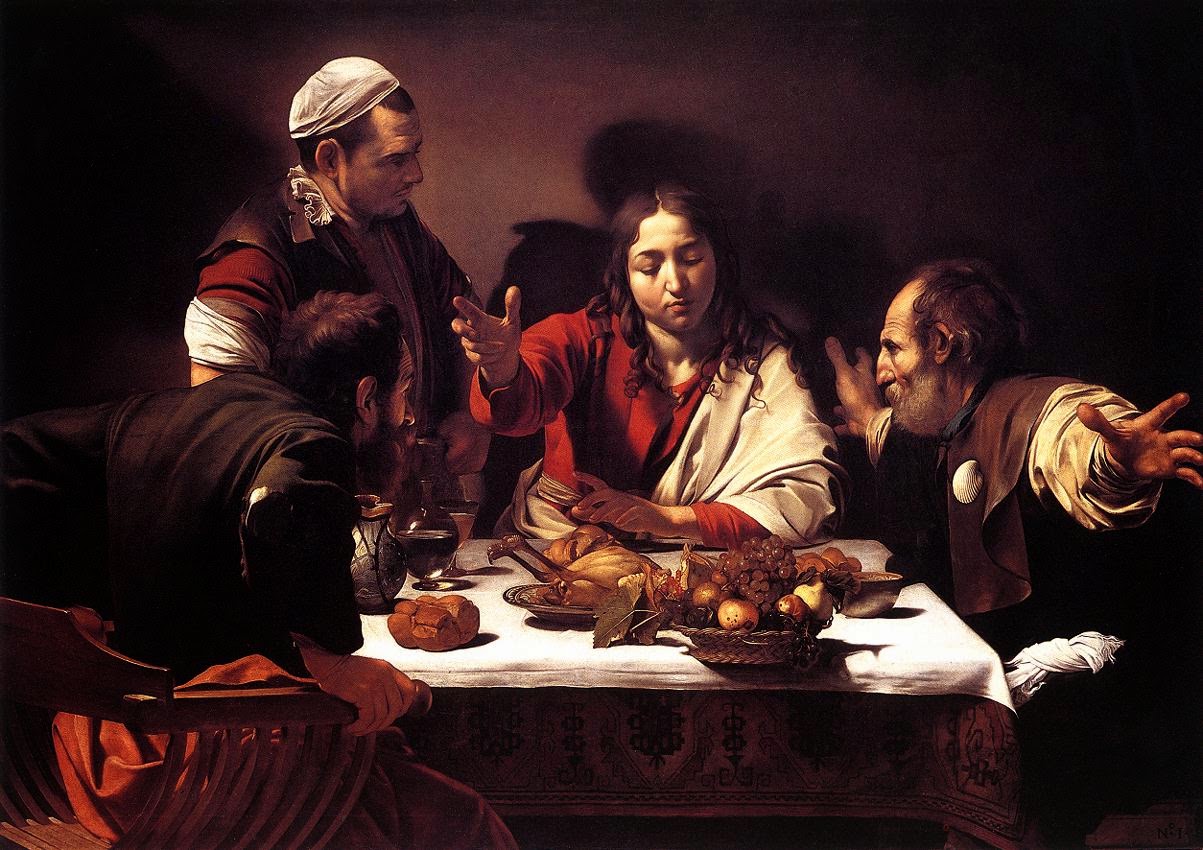 And below is 12 Years a Slave 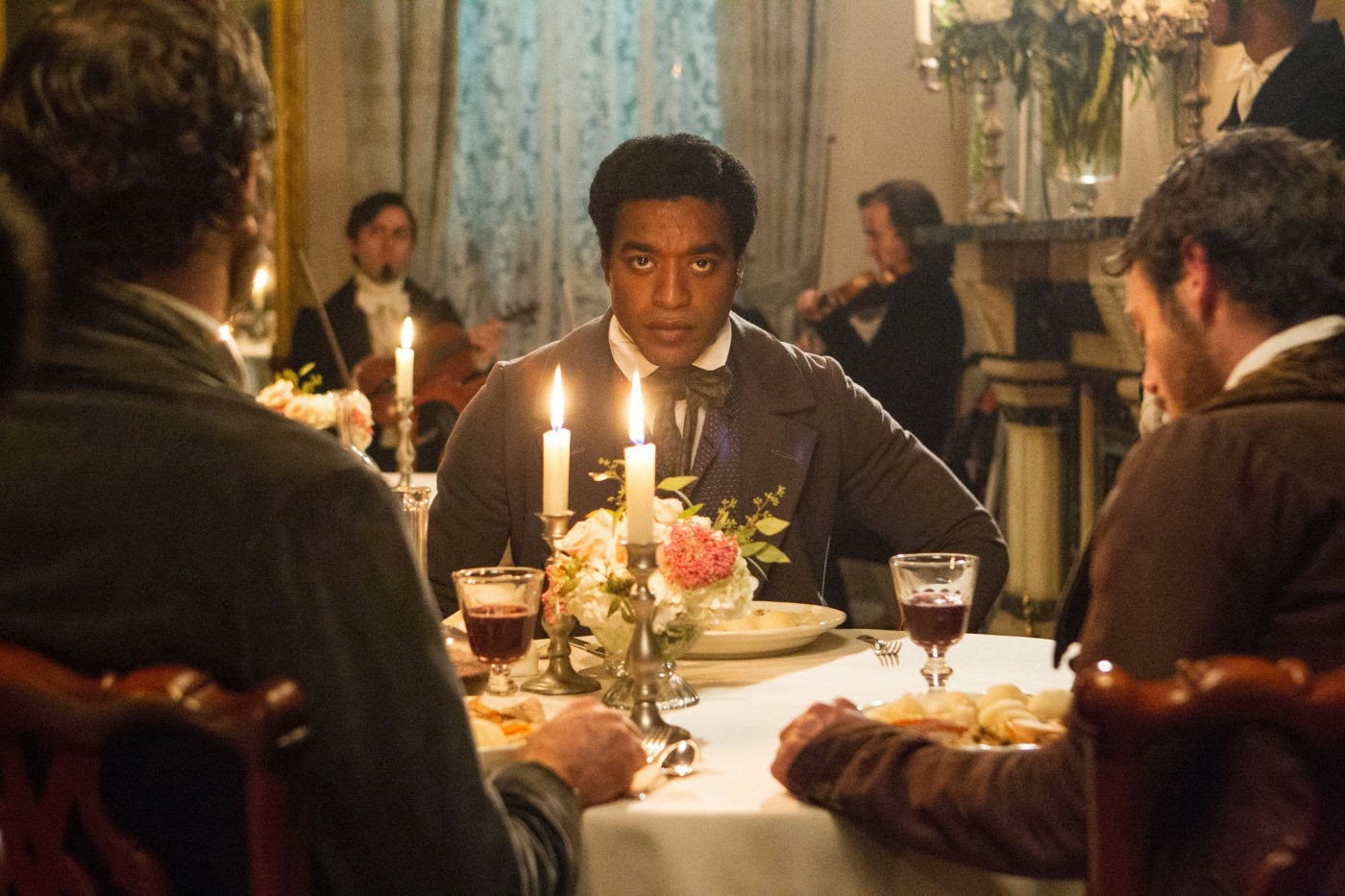 One last reference to art, which was evident was this...

and it points to this Georges Seurat's pre-pointilism Sunday Afternoon on the Island of La Grande Jatte (1884). 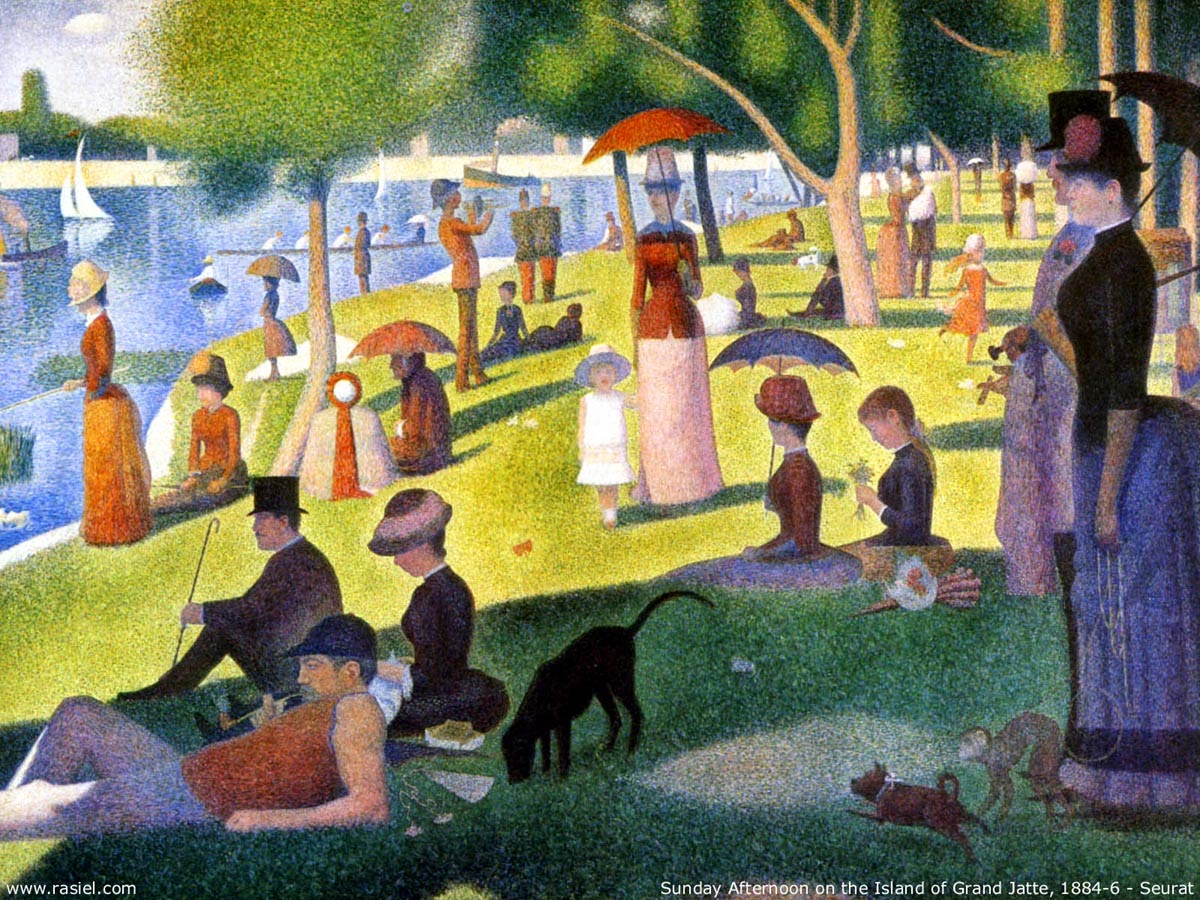 In Winter light, a film that drew on Bergman's upbringing, the priest is torn between infidelity and God. Just as Bergman pushes the envelope on sexuality, McQueen raises the bar in onscreen violence, but not for the sake of it.

If you substitute sex in this description of Bergman's The Silence, for slavery, you could be referring to McQueen.


Plot in film refers to the structure of the edit, as opposed to story which is the unalloyed narrative of the film. Here, McQueen plays with some modern tropes of Neo-Noir filmmaking. What is often called elliptical filming. It allows the filmmaker to play with different scenes out of order, and by so doing present a plot that acts to refresh the screen and make the audience work.

The scene where Solomon is drugged and ends up in chains, leads to mini flashbacks. McQueen could have let the whole scene play through from drinking wine, to throwing up, then Soloman finding himself in chains.


3. Sound
Sound presents the ability to elicit emotions from the viewer. Far from being subjective, the music is often used to compliment the scene, unless like Eisenstein who uses counterpoint. Music is subliminal when it works well. Interestingly Hans Zimmer is the hand here and he revives those famous chords heard in Inception, at the time this character starts to speak about her loss.

If you listen attentively you'll also hear references from There will be blood (2007).


4. Gaze
The character gaze is another trope from art movies that you find in 12 Years a Slave. Often described as breaking the forth wall, Solomon's long gaze into the camera draws attention to the artefact of filmmaking. It's no longer this subconscious act of realism.  Here's the a shot of the 'gaze' from a film called Summer with Monika, which shocked the film world when it was shown. It's Bergman again!


5. The artist's work
Artists tend to have an ambivalent relationship with their audience. I love this analogy by Bergman, but I believe he misses out an important component.


The artist can only create the work, they want, but unless they live a hermit's life they are undoubtedly affected  by the critique of others - the audience.

They need the audience to thrive - to earn a living, but the more comfortable they become with their personal style (which by the way, has partly been shaped by the audience) the more they become individualists in starting to shun what their old audiences wants, because the artists wants to move on.

Similarly what new audiences yearn for can also be shunned because the audience don't understand the artist's heritage.

This is most evident in music concerts, where sometimes the artists refuses to play the one classic that has defined her work with the audience, because it no longer defines her, as she has moved on.

Conclusion
All filmmaking is a negotiation between several parameters. As I mentioned before it's a dynamic relationship between different techniques and styles.

The easiest step is to learn how to shoot. More difficult is understanding different styles, some of which are 100 years old that may be deemed redundant.

Factual story e.g. news making's achilles is it invented a limited form for the screen, which a televisual literate generation are finding less than challenging today.

McQueen up ends Hollywood's form by reviving art filmmaking with his own developed style, pointing to an understanding of the future. That the rules that defined filmmaking are less stable and that film is no longer framed by defined rules.

David Dunkley Gyimah's PhD research involved exploring the interstices of cinema, documentary and news and what makes compelling video. It is a historical and analytical framework covering the field from its inception to the present. David, an award winning videojournalist states that to understand the future of film and video is to quote award winning doc maker Dimitri Doganis, one of David's ex colleagues, to disregard the boundaries of docs, news and cinema. Play video below.