Innovation in Journalism - what next?

A previous knight Batten Winner for Innovation in Journalism and currently a juror for Britain's leading forum for the Television Community, The RTS, David talks Innovation and our ceaseless search for creativity.

Fifth floor, a couple of hundred metres from one of London's main landmarks, the High Court, thirteen of us have gathered to adjudicate.

The subjects in this case, UK media organisations, about to be judged for their innovation. The prize, industry cred., courtesy of the RTS.

Around two and half hours we debate, posit ideas, occasionally question each other in an attempt to reach a consensus, or not. The victor, from a short list, will be announced at the industry's black tie event at the Grosvenor House.

Obvious innovation  can be rare. There are only a limited number of devices which mimic Twitter, Facebook etc. and in any case their innovation within media is retrospective, and they tend to initially exist outside mainstream media's norms.

A more common approach is the adoption of a technology and its application. Last year CNN's Twitter football won  by combining football punditry with a twitter feed spatial map. The more the conversation, the greater the panel site.  It got my vote judging last year.

Adopting a technology can sometimes be like fishing for Tuna. You rarely get a big catch, and often throwing the line is trial and error.

But there are ways to grapple with innovation, though its not full proof, through reverse engineering the exploits of others. 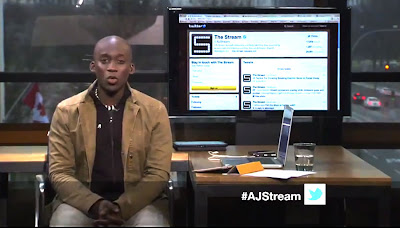 The Stream made by Al Jazeera is a good example to critique because it poses more questions too. The issue references back-story as a variable contextualising innovation.

The programme, a 4-day interactive current affairs show is built around the mesh of social networks. Its prominence should be the holy grail, a  template for broadcasters and media ventures as social, has and will, continue to develop.

Presented by the charismatic Harvard educated Derrick @ashong, it punches above its weight on issues broadcasters might skirt around.

In journalism folklore public figures - senators, members of parliament - loathe being interviewed by non professionals because they break protocol. They ask questions, which journalists might consider off-limits.

Famously, Britain's PM Margaret Thatchers gotcha by a house wife is the example. Thatcher would avoid any situation like this thereafter.

The Stream gives the impression that its on-screen team, as slick as they look, are non pros. People like you and me, asking the questions we'd all like to know. They don't postulate or grandstand.

But as a critique, whilst the content and excursion around its social apps is admirable, it's yet to find the groove which characterises how TV shows will look in the future.

Admittedly this may not be its remit, but if not it's one to consider.

Innovation can be a harsh word. In critiquing innovation or anything media-related for that matter, we search for analogies or the exceptional for comparison. We examines schemas - how the show works and with what - as one example.

We look for the descriptive and analytical to contextualise and then justify its innovation by rhetoric.

To that end, The Stream stumbles upon a perennial problem faced by broadcasters. Note, this is not to say the show isn't valued by its many followers, this is an analysis which looks to mark out its implicit and explicit forms of innovation and how you might replicate it.

What's explicit is obvious- the show, its presenters and content. There's nothing like it on Al Jazeera and nothing quite like it on other genre broadcasters. Comparing genres is an invaluable source in critiquing.


The implicit is how you move past television's face-value semiotic of the chat show. Cut back twenty years ago on British Television and a show I worked for called BBC Reportage (see report) - made by the youth for the youth and upwards -  broke nearly every rule in the book.

It tracked down mercenaries and their relationship with city financiers, it uncovered the first instances of school children swapping floppy disks with unsavoury material. And it went deep into Palestine- Israel's Intafada.

Had Reportage been around today, you'd want to know how they'd turn TV inside out and what it would look like in the 21st century. And that's the challenge for  a programme like The Stream, replicable you.

Its low-fi and slightly out of the convention of TV, but not nearly enough because you suspect the people behind it are TV execs. And herein is a back story that innovation begs.

Innovation, now a feature of my doctorate begs who and what's behind it.  Facebook is mightily innovative but it garnered a new sheen when we realised it was one person.

We place store in knowing who's behind a product and the skill set employed, organisational or technical, to bring something to fruition.

It doesn't negate whole teams being innovative, but there's something about the individual. So there's extra kudos to be combed from The Stream's production team.

Remember classical TV's false economy has always been to acknowledge the front of screen talent, while ignoring or tacitly endearing the production team.

This is wrong. New model shows should take the time to credit all talent. Youth TV did try it with the zoo format, so a precedent exists.

The Knight Batten Awards for Innovation in Journalism; from david dunkley gyimah on Vimeo.

Innovation therefore has come to look like that pot of gold at the end of the rainbow. Ellusive, but it can be fostered by working formats outside of their paradigm, or bringing professionals into fresh situations.

Take coders in journalism, designers in sound crafting,  or journalists becoming visual, rather than literary.

My own Knight Batten story from 2005 made use of theses semantic associations. The vision back then was to pull videojournalism and online design together. But the design had an aesthetic which ensured it did not fall of the page. It did not scroll.

In the future I believed web pages would be viewed on screens e.g. TV and mobile. Cue the IPad later. Clever? Not at all. Most of the devices we use have been around at some point before they break through.

Marshall McLuhan called it rearviewmirrow. Looking for something new by searching the past. So historical analysis of media is a sure fire way of thinking what next.

The great Art historian EH Gombrich saw all art/ creations as reversions. Our influences are so strong if you were going to make a new TV Show, you'd base it so close to what TV is already.

Media innovation therefore is essentially a mash up of  tech, practice and the psychology of behaviour.  It's also time-bound. When someone's at it and it becomes de rigeur - everyone follows.  True innovation is a maverick tendency. It's out there.

If you're a student or industry practitioner it's whether you're bloody minded to go against the grain, but trust your instincts.


What comes next in Social Network of News?

The art of knowing - Problem solving in Post new media


+
P.S Not a lot of people know this, but did you know Al Jazeera's website was modelled on the site  www.viewmagazine.tv, I built. Al Jazeera's first head of design was a friend of a friend, Riz Khan. I met with him as AJ was being formed in London and he took my website and sourced it out to a number of agencies requesting they model AJs close to, but improving upon viewmagazine.tv