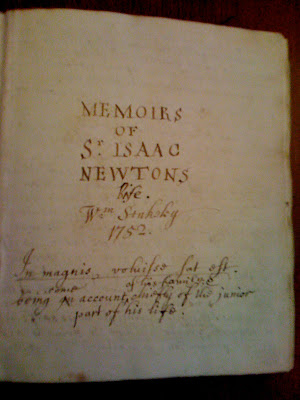 The two figures moved into a room and had tea whereupon one occassioned to the other about a theory. Why does not the apple falling from the tree fall sideways? Why does it fall straight down?

We know the story ( I have embellished it a bit) too well, but the actual recording of it along the lines above is a rare sight.

This was a meeting recorded by Stuksky and the great Sir Isaac Newton in the actual memoirs tucked away from public view, within the veins of The Royal Society.

The Royal Society is the world's oldest scientific academy and still going strong since its launch in 1660.

Yesterday a number of airs ( artists in residence) were given a quiet tour about this eminent club and building in Pall Mall, which included going into the vaults, where original minutes of the Royal Societies inauguration are to be found.

We were able to handle, with great care, the books and see seeds brought back by botanists from far off voyages ( which means the East) 350 years ago.

Lemn Sissay, Poet and artists in residence, will be creating a piece for the RS for an event next year.

I captured some images on my phone and will post some more soon.
Posted by Dr David Dunkley Gyimah at 7:21 am