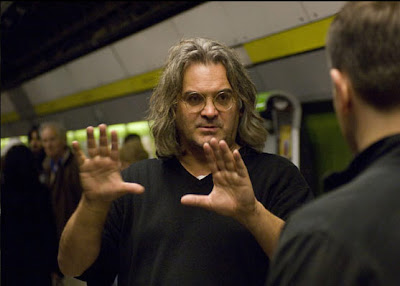 Peter at Shooting by numbers picked up this post - an interesting discussion over at Vanity - about Bourne and whether it has raised the stakes in movie making or is queasy movie making.

Some of you may remember I had been in talks with Greengrass' PA about an interview which at the last moment fell through, but I'm hoping to be lucky in the future.

Not quite Bourne, but this month I'll kick off the big interviews on the subject of multimedia with a key figure and an interesting, I hope bent to the interview process.

Anyway that's for another day


Bourne Magic or Sleight of hand

That it attracts a wide array of opinions, more often than not evoking discussion about the craft of film making, is part testimony.

Film making irrefutably is a living art and every director possesses a DNA, unique or recombinant, which either adds to the gene pool or not.

Pudovkin and Eisenstein which was raised as a post on Variety's post and is often wheeled out when speaking genres isn't contestable alongside Greengrass.

They are the Eves or Adams, much studied and dissected in film schools and in which thousands following have paid hommage one way or another e.g. BattleShip P. and The Untouchables.

The kinetic-aesthetic look Greengrass rides us along in Bourne has strands from a milestone visual shift in the 90s with US drama Homicide - Life on the Street (handheld) and Bochco's NYPD Blue, where the plane of filmmaker frees up again and the viewer appears almost to be onset caught up in the frenzy.

Peter Yates' Bullitt freed up areas of film directing before and many others have done since.

Hit TV series 24 does handheld, in some parts even with a DVCam - see if you can spot it.

For videojournalists like myself , Paul and his team up the ante.

There's a photojournalistic quality and an added energy within the lens (those movements), let alone the scene, that has a visceral quotient a bit like Marmite (British spread) you either absolutely love it or you absolutely don't.

Personally, I am hugely wowed, as are students from the Masters programme I teach - a position which obviously won't be the same elsewhere.

But just as other directors and movies have influenced a genre, Greengrass has done something with the spy narrative and dramatic film (U93) that will yield comparisons alongside other directors and films I reckon for a long time to come.
Posted by Dr David Dunkley Gyimah at 10:53 am